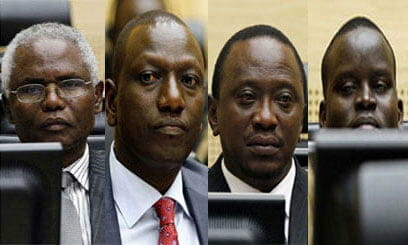 A former MP mentioned in the just released evidence against President Uhuru Kenyatta by the ICC prosecution has claimed he was approached to testify against the President with an offer of Sh200 million. Former Nakuru Town MP David Manyara, who in the evidence released by ICC Prosecutor Fatou Bensouda is accused of being Uhuru’s co-ordinator in Nakuru and buying pangas and guns for distribution to Mungiki, said ICC officials on several occasions approached him to testify against him. Terming the allegations as fabrications, Manyara said the prosecution officials started with an offer of Sh20 million and kept increasing upto Sh200 million. ” ICC officials approached me on several occasions and attempted to lure me with millions of money to testify against Uhuru but I declined. This is the reason they had to fabricate the lies against me. Why did they want me to be a prosecution witness?” said Manyara. The former Nakuru town MP dismissed the allegations that he had links with the outlawed Mungiki sect and that he went around the town with a loud speaker warning non- Kikuyus to leave during the violence. “I was arrested in connection with those allegations but was acquitted by a local court due to lack of evidence. The ICC instead of trying to establish the truth opted to rely on rumours and fabricated evidence by the civil society,” he told a press conference in Nakuru town. Former Naivasha MP John Mututho also termed as nonsensical the attempt by ICC to link him with the violence in Naivasha town, saying he offered refuge to many victims at his home. See also: Kenya gears up for major tourism conference The former MP, who is the Chairman of the National Authority for the Campaign Against Drug Abuse(Nacada), said he played a major role in ending the violence in Naivasha. “The ICC was fed with lies by economic opportunists, who were capitalising on its ignorance and never bothered to verify what transpired,” he added. Mututho said it was unbelievable that ICC could claim they planned the violence together with his bitter political rival Jayne Kihara. Manyara said his chief campaigners during his stint as Nakuru Town MP were Luos and he had no reason to plan to attack them as claimed by the ICC prosecutor. POLITICAL MOVE Separately, the Rift Valley Council of Elders said the decision to make the evidence public even after the case had collapsed proves the ICC trials are political as long suspected.
The Council of Elders spokesman Gilbert Kabage accused the court of going against the rule of natural justice by releasing the evidence despite failure to nail the President over the violence. They called for immediate withdraw or conclusion of the case against Deputy President William Ruto and journalist Joshua Sang. Elsewhere, The National Alliance (TNA) party dismissed the evidence. The party’s Secretary General Onyango Oloo said Bensouda was relying on mere allegations. “Bensouda was relying on malicious evidence full of mere allegations. Her evidence did not meet the threshold and that is why she did not proceed with the case,” said Oloo. Speaking to The Standard on phone yesterday, he said many people have died in the country since 2007/2008 post-election violence broke out and not all of them can be attributed to be ICC witnesses. Oloo said Bensouda was unable to link President Kenyatta to the mayhem because she did not conduct thorough investigations but instead relied on activists’ reports and records. See also: Kenya gears up for major tourism conference And yesterday, leaders and civil society personalities reacted differently to the release of the information. Chair of the National Assembly Committee on Justice and Legal Affairs Samuel Chepkonga accused Bensouda of acting in bad faith by releasing the pre-trial brief she intended to use to prosecute the case. “If you have evidence that is unsustainable, the issue just ends there. She is behaving like an activist instead of behaving like lawyer,” Chepkonga said. Activist Ngunjiri Wambugu claimed the application to have the evidence published arose out of a conspiracy between the prosecution and the lawyer for the victims, who had made the application. “After losing the legal argument, Bensouda decided to use the court of public opinion, where people cannot clear their names. She is also telling the world that it doesn’t matter if charges are dropped, she will still destroy your reputation,” said Mr Wambugu. The claims were, however, dismissed by members of the civil society organisations, who had consistently campaigned for the case against the President to proceed. “For a long time, there has been a narrative that there were no investigations carried out and that the prosecutor relied on secondary materials to build evidence. In a very fundamental way, the release of the evidence has destroyed that narrative. The challenge is on the people who have been adversely mentioned. Let them approach the Office of the Prosecutor and provide counter facts,” said Ndungu Wainaina.