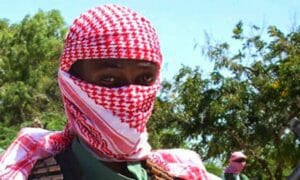 Below is a sad story by a student from Egerton University who had gone to visit his four month old pregnant girlfriend  at Garissa University but ended up dying in his presence.
Read it below.

It was a beautiful Wednesday morning. The chilling cold of early 4A.M numbed my skin as I escorted my fiancee Trizah to the washrooms.

Trizah was a third year at Garissa university doing pure mathematics. We had not met for a period of four months for i was in

another campus. We had missed each other and so, I decided to travel over to their campus and have some swt moments.

The journey to Garissa took me a whole day. I arrived there at around 6pm.

Everythn was cool, students strodded the pavements enjoying their peace and cool air of the dying day. Trizah, took me to her room where she had already exiled her two roomates.

She didnt cook, for i had come with snacks. We talked, we hugged and no one wished to move away. The night quickly beckoned and soon we found ourselves in her small bed. She constantly whispered sweet words in my ears.

The touch of our skins, the feel of our warm breaths on our neck prepared us for a sweet hot streak of love

It was crazy and heartmelting.

After that sweet and sizzling love making, she whispered,

“Hunie, hold me tight, and let know one snatch u from me, Goodnite and I love u”
I obeyed and soon we dozed off!

At around 4AM, we were already up to settle the matters arising from the previous meeting. I heard her whisper,

“Baby, you said 3 in the night,and one hot in the morning?”

“Yes babie, am all over here,” I answered as I stretched.

“Take me out nisusu kwanza,” she requested.

The chilling cold numbed our skin as we entered the washroom.No sooner had we entered her room than we heard gun shots!

“Hawa KDF,wamekosa kazi? They always shoot in the air,” she said as we lowered ourselves on the bed.

Just then, her friend Grace called, “Mmeskia mabunduki? Tumevamiwa!” I heard Grace shout over the phone.

As she continued to talk, a bullet exploded in the corridor sending us into a shear shock!
“Bebz, nikubaya,” Trizah trembled.

“Nothing harm will happen to you” I boldly said, but from inside I was weakened.

She swiftly moved towards the door to turn the lights off.

She then moved quickly to where I was and requested me to hold her becoz she was scared.
Her heart was beating soundly!

“mh-mh” she murmured as she quickly sprang out of bed to close.

She managed to put a lock, bt as she was coming back to bed, a bullet hit the door locker open and got her

straight in her thorax. She didnt scream, she fell down with a thud and whispered,
“Honey, nimepatwa! Go under the bed,!

Her voiced drained in my minds as I quickly got below the bed. The shooter, sent a flying kick into the door and

switched on the lights. I could see my love succumbing to death, I wanted to come out.
Her eyes gazed directed into mine. The merciless killer pointed the muzzle at her head and shouted,

The horrific scene paralysed me. I fainted. The following day, I found myself in the hospital. As I write from the hospital bed, am traumatized. The only woman I loved died together with our four months baby to be!

To Trizah, you remain in my heart and One Day we will meet.

By Olive Oliver, EGERTON UNIVERSITY.
Would you like to get published on this Popular Blog? You can now email Cyprian Nyakundi any breaking news, Exposes, story ideas, human interest articles or interesting videos on: [email protected] Videos and pictures can be sent to +254 710 280 973 on WhatsApp, Signal and Telegram.