This morning, the world woke up to the news that a one time Somali refugee had been elected as the first muslim woman in the US Congress. Omar fled Somalia’s civil war with her parents at the age of eight and spent four years at the Dadaab Refugee Camp in Kenya before her family settled in Minnesota in 1997, where there is a sizable Somali population.

In the spirit of fitting in, Jubilee operatives led by Dennis Itumbi joined the rest of the world in posting congratulatory messages online. Little did the know that Kenyans had kept records of their past sentiments regarding refugees in the country.

It was very ironic that a group which heavily advocated for the closure of Dadaab Refugee Camp in 2016 and negatively profiled Somali refugees were suddenly congratulating a young woman who at one time sought refuge at the same camp before moving abroad. 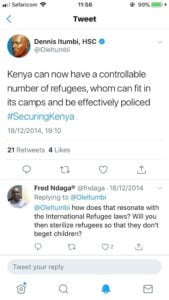 Caption: Dennis Itumbi’s tweet from 2014 supporting the move to close down refugee camps in the country. 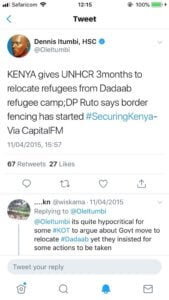 Caption: Another tweet by Dennis Itumbi in 2015 when refugees were being relocated from Dadaab Refugee Camp. 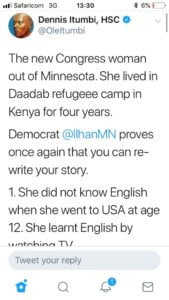 Had the camp been closed down based on the absurd “security reasons” they gave, then that would have denied many young boys and girls like Omar an opportunity to shape their destinies.

Kenyans were seemingly pissed off by this unbelievable hypocrisy from the Jubilee operatives and pulled receipts from the archives to put them in their place accompanied by strong condemnation. 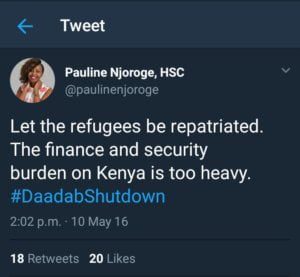 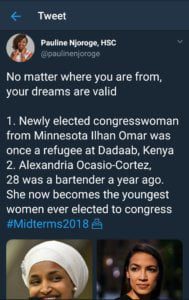 Incidences of the government or its representatives making awkwardly embarrassing posts online have been very frequent of late as Uhuru Kenyatta fights to leave a notable legacy after he finishes his ten year term marred by corruption and huge foreign debt.