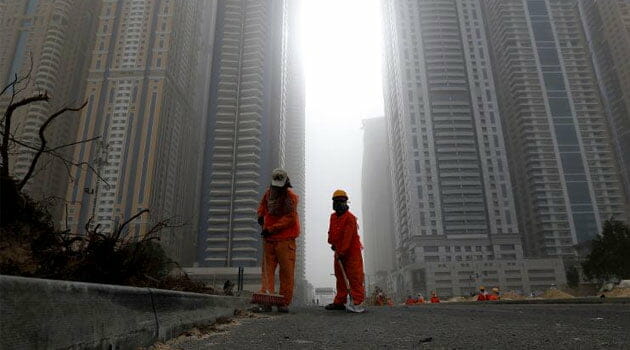 Hundreds of panicked residents fled one of the tallest towers in Dubai early Saturday as a huge fire engulfed the skyscraper, causing extensive damage to its luxury flats.

The inferno gutted the upper part of 79-storey Torch tower, triggering an evacuation of nearby blocks in the Dubai Marina neighbourhood, an AFP correspondent reported.

Amateur footage posted online showed fire engulfing the upper floors of the tower — home to hundreds of expatriates — with debris falling onto the road as strong winds fanned the flames.

Civil defence teams cleared the building, which at 336.1 metres (1,105 feet) is one of the world’s tallest residential towers.

No casualties were reported but seven people were treated at the scene for smoke inhalation.

Firefighters battled the blaze for more than two hours, before hundreds of residents of nearby towers were allowed to return to their apartments.

Dubai Marina is a popular expat neighbourhood that has a high concentration of residential towers. It is also a major tourist attraction.

Dubai, known for its skyline of hugely varied skyscrapers, has seen fires at towers in the past.

In 2012, a huge blaze gutted the 34-storey Tamweel Tower in the nearby Jumeirah Lake Towers district. It was later revealed to have been caused by a cigarette butt thrown into a bin.