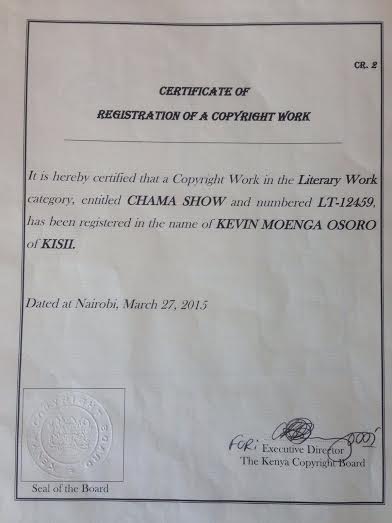 Ladies and gentlemen. We revealed to you how “Beyond Zero” was an idea stolen from a young girl Erica Njeri Gachoka.

We also broke the sad story of how Chris Kirubi used his influence and gay boyfriends working as brand managers and CEO’s in various corporates, to undermind Blankets and Wine after its founder Muthoni Ndonga declined to give him a controlling stake for her event.

We are clear in our minds that these are the facts because if they weren’t, the individuals involved would have already denied our articles.

Nairobi is one toxic ecosystem that only elevates the most mediocre who only survive on stealing ideas and blocking those who are deserving. The output and quality has been grossly undermined, leading to endemic mediocrity beginning with media, pathetic advertisements and sub-standard initiatives.

Simply because the people in offices stole ideas and executed them with half-baked enthusiasm.

Read below how Wachira Waruru Stole this young man’s idea to make a flawed show.

Hi, Cyprian my name is Osoro Moenga and I’m grateful for this opportunity to interact with you.

I know you get alot of emails like this but please take time and read this one. I read your recent blog about Kenyan Televisions sabotaging and stealing writers’ ideas and I have to tell you I’m a victim too.

Early last year, I presented my script for a show, ‘CHAMA’ to Citizen Tv for review and possible production, at time I wasn’t able to raise money to shoot a pilot episode. I never heard from them since then.

Sometime last month, my sister called me to inform me she has seen Citizen TV airing a teaser for their upcoming show ‘Top chama’ with exactly the same content as my script; you can read the specific portion highlighted and compare it with the upcoming citizen TV show. 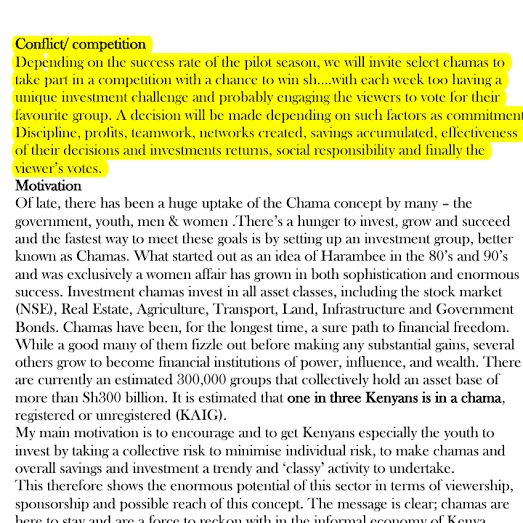 I was devastated because they had infringed my copyright and stolen a portion from my script and made a show out of it. Below I have attached the same section below.

What’s even more annoying is they did it all wrong and not the way I had envisioned it to be.

As an aggrieved party I approached Citizen TV and UNAITAS about the same and in their own words they boldly told me we meet in Court.

The rights of Kenyan Writers have been infringed for far too long now and I know my case is not the only one. The Kenya Copyright Board is virtually toothless, they keep postponing meetings telling me the boss is not around which is sad actually. You are a writer and you know how long it takes to come up with these ideas for someone with money and power to come ad steal them knowing they are virtually untouchable and I’m very happy because of late, the power of blogging and social media is keeping these corporate thieves in check.

My hope is that this case and many others will highlight what we go through as content creators and hopefully set a precedent for others, warning upcoming writers of these issues and ultimately protecting the real creatives from such intellectual property-theft.

I hope my letter to you will expose the rot in the Kenyan media who are always ready to pounce on other people’s ideas.

I know you can help and my wish is if you can just take your time and look at that script and the specific portion that was infringed.  Give my story the chance to run on your blog and shame these thieves. I would appreciate it for not just for me, but for every Kenyan creative out there who has a dream to produce quality content and for Kenyan viewers who crave for the same.

I have attached the script and copyright to prove my claim. I have also underlined the specific section infringed.

Please help me, where and if you can,

Thank you and have a pleasant time.

Thank you Osoro Moenga for contacting us. Unlike Robert Alai, I promised never to censor any information sent to me by you or any other Kenyan of goodwill.

The issue of intellectual property-theft has been rife in corporate Nairobi, where executives feel that they are big and untouchable and thus cannot be taken anywhere.

We have a mediocre Government that promised youth of means to monetize their ideas but none of that has come to fruition. Instead, even the little allocated for the Youth Fund was embezzled by Uhuru’s former deskmate Bruce Odhiambo.

In other countries, intellectual property-theft is a serious crime that would compel Wachira Waruru and Farida Karoney to resign. But since Citizen are in bed with Jubilee, since Wachira is Uhuru’s former schoolmate and Karoney is Ruto’s former clandè, they think they are untouchable.

We will fight for you and all other deserving young Kenyans. Walk with us as we change Kenya.