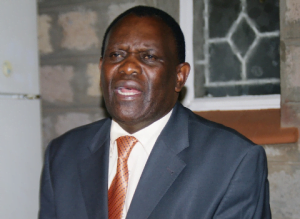 The dead Kabete MP George Muchai was faced with yet another hurdle after he was kicked out of Cotu top leadership. Investigations revealed that Muchai risked losing his parliamentary seat after he failed to resign as a member of a state corporation.
Muchai was then holding two public offices, one as an elected MP and as a member of the board of a state corporation known as National Industrial Training Authority Board, a state corporation in the ministry of Labour, Social Security and Services which is illegal under the law. He was the vice chairman of the board contrary to labour laws.
Although Muchai sat in the state institution as a representative of Cotu where he was prior to his political debut for the Kabete seat, he was supposed to have resigned six months before elections.
Before the 2013 elections, the Independent Electoral and Boundaries Commission issued a directive to all the aspiring candidates already in public service to resign six months before the March 4 general elections in compliance with the law.
During the run-up to the elections, the then Kabete MP Lewis Nguyai attempted to have him blocked from contesting the seat before he resigned but the petition was time barred as he had been cleared by IEBC.
Section 43(5) of the Elections Act, requires that public officers intending to contest elective posts resign at least six months before the polls. According to the act, any public officer who violates the provision is deemed to have committed an offense and is liable upon conviction, to a fine not exceeding Sh1 million or to imprisonment for a term not exceeding three years, or both.
What this meant is that Muchai had continued to withdraw illegal allowances from the Nita board and some members of the civil society were contemplating moving to court to institute private prosecution  to force him refund the money he had earned as allowances from Nita.
The office of the Ombudsman chaired by Otiende Amollo took up the case and wrote to the Attorney General advising prosecution of the MP.
It was then  whispered that Muchai and Labour CS Kazungu Kambi were secretly working on a plot to have the Nita board dissolved to allow Kambi influence new board members of his choice so that he could manipulate them for personal financial gain.
Despite drawing salary as MP and as Nita vice-chairman, Muchai was  known to have unending financial problems. While in foreign trips, he used to call Cotu with claims that he was stranded and Cotu would send him money to bail him out.
Muchai’s trouble began in April 2014  when Kiambu governor Willian Kabogo recorded a statement at the Central Police Station following an incident in which he declared and agreed that he had been whipped by Muchai. 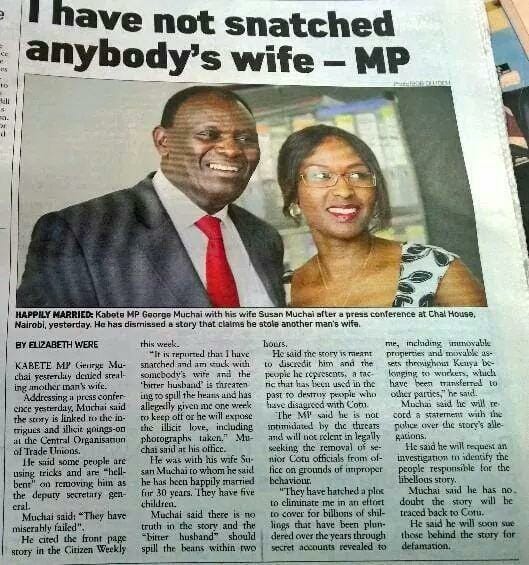 Muchai is said to have whipped Kabogo on random body parts and struck him 17 times before he escaped. Sources say that on the day at around 6.07 pm Kabogo and Kabete OCS were having coffee at a hotel in Thika town when Muchai in the company of three stormed the hotel demanding explanations from the governor on allegations that Muchai had embezzled Sh1.2b meant for tarmacking Wangige- Ngecha road. Back in his constituency, Muchai who  hardly visited his voters was  in trouble for allegedly misappropriating public funds. Other sources had it Kabete voters had started collecting signatures to start the process of recalling him.