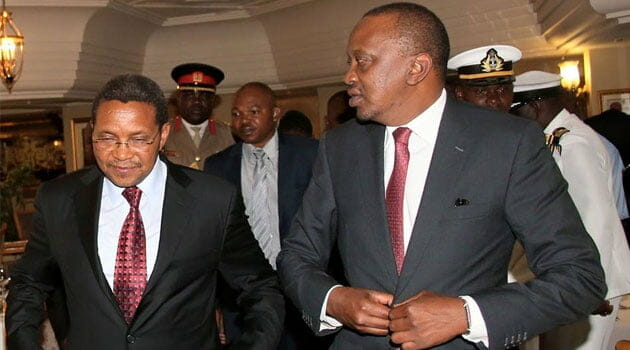 Kenya and Tanzania have called a truce following bi-lateral talks held between President Uhuru Kenyatta and Tanzania’s Jakaya Kikwete over the weekend.

“The two leaders agreed to reinstate the status quo,” Mohammed announced on Sunday on her return from Namibia where presidents Kenyatta and Kikwete reached the agreement on the sidelines of the inauguration of Hage Geingob as president.

It was also agreed that the Kenyan and Tanzanian Ministries of Foreign Affairs, Tourism and Transport will converge in Dar es Salaam, together with Kenyatta and Kikwete’s Chiefs of Staff, to find a long term solution to the grievances that led to the flight reduction and airport ban.

“The two Heads of State emphasised the need to continue to discuss openly issues affecting the brotherly and long-standing bilateral relationship that exists between Tanzania and Kenya,” she said.

And while admitting that the two countries did not see eye to eye on some issues, she denied that the action taken by the Tanzanian Civil Aviation Authority (TCAA) to reduce the number of Kenya Airways flights from Nairobi to Dar es Salaam from 42 to 14 a week, was taken in retaliation to Kenya’s Tourism Cabinet Secretary Phyllis Kandie’s announcement that Tanzania’s tour vans would not be admitted into the JKIA.

The decision was taken in response to Tanzania’s refusal to allow Kenyan tour vans into their parks and airports.

Less than two months later, the TCAA announced that it had taken the decision to reduce the frequency of Kenya’s national carrier’s flights to Dar es Salaam.

“Noting that Bilateral Air Services Agreements (BASA) are negotiated between governments, we are aware that the relevant Kenyan Government agencies have reached out to their Tanzanian counterparts in a bid to resolve the issue,” KQ said in response on Friday.