The State through the Interior Ministry has lost the bid to freeze accounts owned by city cartels who clean their money through betting firms with billions idling in their accounts for three straight months.

This comes after parliament handed the Ministry headed by the authoritative  Fred Matiang’i first win against the gambling cartels when it rejected changes to the Betting Bill.

The bill would empower Matiang’i to freeze the accounts and interrogate the gamblers over the source of money they are cleaning through betting firms.

But Matiang’i has lost to the gamblers as the war to stop criminals from feeding dirty money into their betting wallets where they place chunks and cash out.

“Where a transaction has not been recorded in a player’s account for three consecutive months, the licensee (betting firm) shall deactivate the account and report such an incident to Ufaa,” Matiangi’s ministry said in their submissions to the parliament.

The National Assembly committee on Sports, Culture and Tourism also played to the advantage of the gamblers by rejecting the bill.

The committee reasoned that seizing the idle cash is the role of the Unclaimed Financial Assets Authority (Ufaa) that is mandated to administer, idle assets, shares, insurance policies and unclaimed bank deposits.

The state is aware that the gambling industry that makes revenue of upto Sh204 billion is a perfect breeding ground of criminals seeking to clean dirty money.

The bill rejected by the parliamentarians would see the gamblers lose cash with their accounts frozen if they failed to lodge claims with Ufaa within 90 days. 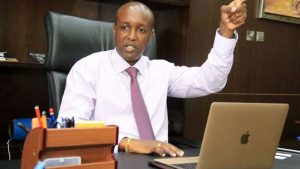 The proposal would also see suspended betting firms that needed to make a comeback seek approval from UFAA to access their accounts and cash.

The State’s divided war to crash the gamblers by making it compulsory for all betting firms to report transactions above Sh1 million and suspicious bets to the Betting Control and Licencing Board (BCLB) was challenged in court and the betting firms have continued to a make a progressive comeback.

Questionable transactions should be reported to the Financial Reporting Centre that is empowered to track dirty money.

Kenya is in the international radar over inflows of dirty money, mostly proceeds of drug, corruption, phony businesses and crime, drugs which is put in betting firms, real estate, high end cars and land grapping.

In this article:Fred Matiang’i, Gambling in Kenya, Interior Ministry, SportPesa