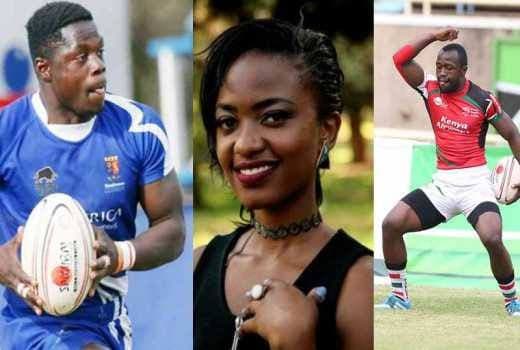 CAPTION: Alleged rape victim Wendy Kemunto next to rugby stars Alex Olaba and Frank Wanyama who were accused of committing the heinous act

Just a year after he and his co-accused Frank Wanyama were released on a Sh 300,000 cash bail in their rape case, ex-rugby player Alex Olaba Mahaga is back in the headlines yet again.

This is after reports emerged on Friday morning that Olaba was on Thursday night arrested over claims of attempting to murder one of the witnesses in his trial is yet to be concluded.

According to a police report, the former Kenya Harlequins star was planning to kill a key witness in the case and was arrested in Nairobi West where he was unknowingly meeting an undercover crime detective in the guise of an assassin to plan the said murder of the suspect.

During the operation, two mobile phones were recovered from Olaba and are currently under forensic investigation in a bid to establish whether there might be other accomplices in the crime.

Police calim they have intel that Olaba had approached another party with the same goal of witnessing the party.

Following his arrest on Thursday, Olaba is said to have told police that he is possessed by satanic spirits.

He claims the evil spirits inspired his thoughts to plan murder.

Olaba is expected in court today to face his of attempted murder and conspiracy to defeat justice.

Prior to the High Court granting them bail last year, Olaba and his buddy Wanyama had been handed a 15-year prison sentence.

They were charged with gang-raping Wendy Kemunto on February 10 last year at an apartment in Highrise, Nairobi County.

Up to date, the two insist that the sexual escapade was mutually agreed upon.