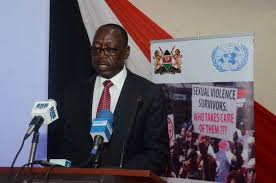 There is a Big war going on between Anne Waiguru and Engineer Mangiti who happens to be the Planning Permanent secretary .

For many months, the Jubilee Strategists have been working on a way to fix Mangiti and save Waiguru who has been under fire for Looting the NYS.

Cyprian Nyakundi has discovered that Mangiti intentionally leaked the document that exposed how taxpayers money was spent to buy things that do not add Value at all . When the media confronted Mangiti, he said that the Leak was ” Accidental ” – An argument only a Fool would believe.

But the Ministry of Devolution has confirmed that they purchased sex toys, pens & condoms. That is what matters. We don’t want many stories.

My sources have confirmed that Mangiti intentionally leaked the document to reduce pressure that was piling on him . Some Jubilee strategists have accused him of working with outsiders to destabilize the government .

While being interrogated, Waiguru distanced herself from the scandal blaming Mangiti . So which strategy are the Jubilee Guys using to fix Mangiti ?

My sources have confirmed that Media and social media propaganda will be used to fight him and demand for his arrest . If you are an active User of twitter, Chances are that you have seen the hashtag #ArrestMangiti that has been bankrolled by Jubilee Strategists . In their quest to Fix him, they will ask why he released a Document then later withdrew it despite the fact that Mangiti was forced to say that the document was inaccurate .My sources  also reveal that the DPP will be forced to prosecute Mangiti together with other NYS officials . In all this , Waiguru will not be harassed because she is a sacred cow. My sources also allude that these guys will be harassed and intimidated so that they cant reveal more as far as the NYS grand theft is concerned  . Unconfirmed sources also reveal to me that Githinji will be forced to Resign so that Kenyans will be fooled to believe that something is being done about the NYS Graft.

Will they Succeed ? Keep it at CNYAKUNDI.COM as we bring you more shocking revelations about the NYS scandal .