The name of Kakamega deputy governor Philip Kutima is prominently featuring in the wars around the burial of Governor Wycliffe Oparanya’s chief-of-staff Robert Sumbi who ‘succumbed’ to covid-19.

Kutima who had plans of nominating Sumbi as his running mate to succeed Oparanya in 2022 first ensured he hooked Sumbi to a Kabras lady when he worked as a minister in Oparanya’s first term.

The gullible Sumbi ended up living with the lady as his second wife despite being officially married, wedded and with children.

He had not even paid dowry at the time of his death, in ‘affair’ that his first wife Sussy Sumbi still considers  a big disappointment .

Mrs Sumbi who lectures in a local university in Kakamega literally fed and dressed him when he went broke after losing in the Mumias East parliamentary race in 2013.

He spent all his fortunes in the campaigns to an extent that he would only depend on his wife (Sussy) for survival until Oparanya came to his rescue with a cabinet job.

Deceitful Kutima only needed skirts and beer to manipulate Sumbi to make political advancements as he tore the deceased’s family apart.

He further blinded Sumbi by ensuring his mistress secured a job at the Kakamega County office as the illegal couple also rented a new place at the Kenfico Estate in the outskirts of Kakamega town.

Pundits point that Kutima’s intention was to cement his political base in Kabras to add to his populous Wanga community.

The crafty man also wanted to sell the notion that having Sumbi move with a lady from Kabras would tighten ties with the Wangas.

And now his role in Sumbi’s burial saga has been exposed after the first wife rushed to court to stop the funeral proceedings being rushed by county officers and the mistress.

Kutima is secretly working ways to have the relatives of the mistress to be recognized by Sumbi’s parents as the second wife.

He is also pushing the family of the deceased to pay dowry in death but the battle of the two women has shifted to wealth that includes a Prado on loan and some property in Nairobi.

Mrs Sussy Nandama Sumbi, the officially wedded wife and the mistress, Ms Yvonne Tanui are also battling over Sumbi’s benefits at the county where he worked as Trade minister and then chief-of-staff. 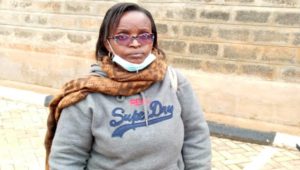 Mrs. Sumbi moved to the Kakamega chief magistrate’s court and obtained orders stopping Ms Tanui and the deceased’s brother Augustine Sumbi from collecting the body or burying it.

The orders  issued by magistrate H Wandera on November 3 came as a shocker to Sumbi’s colleagues with the widow camping at the Kakamega funeral parlour.

Mrs Sumbi took made the move after she heard of the mistress’s plans to steal the body for a secret burial elsewhere.

“I have served the orders to all parties involved. I will camp at the parlour so that the planned stealing of my husband’s remains, as word has gone round, is not fruitful,” said Mrs. Sumbi.

The standoff over the burial Governor Oparanyas aide is expected to could take longer given the several demands by Mrs Sumbi.

Maloba and Buluma are hell bent to ensure that the mistress succeeds in disinheriting Mrs. Sumbi and her children off prime plots in Kajiado and house in Kitengela.

Ms Tanui is not officially married to the deceased and does not have children with him.

But the property the two women does not belong to Sumbi another corrupt senior official in Oparanya’s administration who use  county officer but to a senior county official who only used Sumbi as a conduit.

Mrs Sumbi is fighting for the property that was not actually bought by her late husband but phony senior officials including Kutima are manipulating  the mistress (Ms Tanui) to take charge and return the property that belongs to the county cartels.