Migori Governor Okoth Obado is facing a possible impeachment by the leadership of the Orange Democratic Party and Members of Migori County Assembly.

This is after ODM’s executive director Oduor Ong’wen instructed Majority Whip Keke Oyugi to invite all the ODM MCAs to a consultative meeting at Chungwa House on Tuesday September 1.

Hon. Keke downplayed reports that the MCAs are plotting to impeach the governor, claiming that the agenda of the meeting will be set during the meeting.

“I was directed by party executive director Oduor Ongwen to whip the MCAs for the meeting, I am not aware of any scheme against Governor Obado or anyone. That is a rumour,” Keke said.

He, however, called on the media to remain calm until the Tuesday meeting and the outcome made public.

Ong’wen’s directive comes on the same day the embattled governor was released on a Sh8.7 million cash bail after spending four days in police cells. 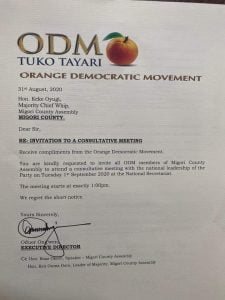 Chief Magistrate Lawrence Mugambi who made the ruling also barred the governor from accessing Migori County offices until his case is determined.

Obado was released together with his four children Dan Okoth, Jerry Okoth, Scarlet Okoth and Evelyn Okoth were released on Sh2 million cash bail each and their family friend Jared Odoyo on Sh8.25 million.

Migori County boss who is also facing murder charges in a separate case had earlier accused the Raila Odinga led party of scheming to impeach him before his case is concluded.

Obado told a local paper that he was aware of a meeting by ODM top leadership and some MPs from Migori that plotted his ouster.

He further accused ODM leadership of inciting MCAs to prepare an impeachment motion against him in the coming days.

MPs met some top officials from the party on Sunday at a City hotel where all MPs were present except Kuria West MP Mathias Robi.

ODM Mps from Migori county have been instructed to whip their MCAs to impeach the governor who is facing corruption cases together with some of his family members.

They are accused of embezzling over Sh73 million public cash.

Obado added that the meeting scheduled for Tuesday where MCAs have been summoned at Chungwa House is all about his impeachment.

He also claimed that such suspect activities could be part of a wider scheme to influence the outcome of the case.

In this article:Corruption in Kenya, ODM Party, Okoth Obado