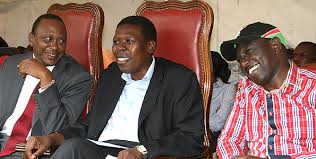 St Anthony Academy principal Cosmas Nabungolo who has shown interest in contesting for the gubernatorial seat in 2017 after his retirement has been ranked position one with 31.34pc were elections to be held in Trans Nzoia today.
The random online sampling by the North Rift News ranked nominated Water cabinet secretary Eugene Wamalwa second with 26.1pc, Kakai Bisau 19.4pc, Governor Patrick Khaemba 10.45pc, Noah Wekesa 6.7pc, Jane Wamboi 2.99pc and deputy governor Stanely Tarus with 2.9pc. Word has it that if Wamalwa decides to declare he will go for the seat, things could get complex for Nabungolo rising star. Wamalwa is under pressure from supporters to run for governorship come 2017.
The poll opinion that was held May 30, ranked women representative Janet Nang’abo with 27.59pc followed closely by Immaculate Shamala with 23.28 pc, Jennipher Masis 14.66pc, Zipporah Kittony 8.62pc, Christine Tanguli 8.62pc, Susan Kiprop 5.17pc, Christine Barasa 4.31pc, Naomi Okul 2.59pc, Doroth Cherop Mikisi 2.59c, executive in charge of land Elizabeth Nyongesa 1.72pc and Eunice Karanja 0.85pc.
For Senator Henry Ole Ndiema was in front with 31.7pc followed by Kipruto Kirwa 22.07pc, Gatherine Mukite 20pc, Robert Wamalwa 7.59, Peter Chemuigut 5.84, Orie Rogo Manduli 4.14pc, Isaac Njenga 4.14pc and Kipkemboi Rotich 2.76pc.
The former senatorial aspirant Ken Wafula said although he was forgotten in the poll listing, he is still in the race come 2017.
Khaemba’s pointman Ben Mulipuko rubbished the poll and wondered what Nabungolo has done to be ranked in position one.
He said if they were relying on fame, Khaemba is famous and has done a lot adding the poll was not fair but full of propaganda and asked Trans Nzoia residents not to rely on poll theories that do not exist.