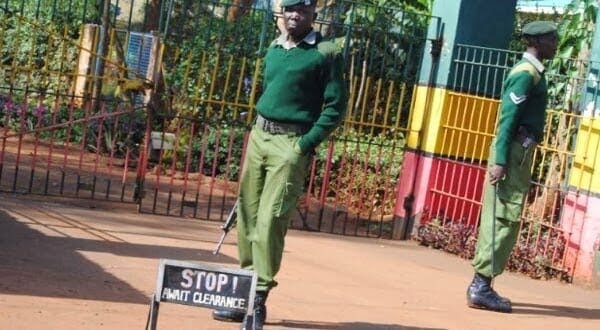 He sat on the edge of the bed to put on his shoes. He allowed himself a small grimace as he bent over to tie his shoe laces. It was 4 o’clock in the morning. The bedroom was still chill, his breath condensed in front of his face. He stood up and stamped his boots on the worn  rag to settle them, testing the tightness of his ankles, he frowned again at a different kind of ache, another memory he could not blank.

Donning his jacket by the broken and weak window in the single room, he looked out but the memory still haunted him. He sought no panacea to face the reality- The man made reality he has tried not to accept.

” But I am just a warden who was just trying to make it in life ”  he said to himself. He remembered how he had been transferred to Maralal GK prison even after trying to convince his boss that he had already got a letter admitting him to Kenyatta University main Campus to study Electrical and Electronics engineering. He recalled how he frantically written a well crafted letter to Prisons boss Isaiah Osugo requesting for permission to further his studies.

He remembered how his friends were happy for him. They had congratulated him and given him thumbs up for making such a great stride in life. But why did Ali, My boss at Kajiado GK prison conspire with some  rogue officers to transfer me to Maralal? This question kept popping up no matter how hard he tried to forget the ordeal.

Many days had passed since he got his admission letter and the forced transfer. He had not even said goodbye to his friends at Kajiado GK prison. The he remembered the call from Kenyatta University . The call was from a lady with a sweet voice ” Hallo sir, we are waiting for you, or do you want us to give somebody else your letter  ? Do you know how many people are dying to do electrical and electronic engineering ” His phone had gone off before he told her story. He wanted to tell her his story …He wanted to explain to her how Ali, his Kajiado GK prison boss had conspired with some rogue officer to kill his star . But he was just a junior prison warder who cant fight the big fish.

One way to rid himself of the bad memories he sang softly, he was not used to singing but the situation had made him do so. Now he sang softly, his voice husky . Why is the past coming vividly after me. He cried and missed Kajiado.

He hopes someone out there will listen to him and help. He needs to pursue his electrical and electronic engineering degree at Kenyatta university. lecturers have already commenced and lecturers are wondering why he is not attending lectures . Please help the poor Junior Warder  .