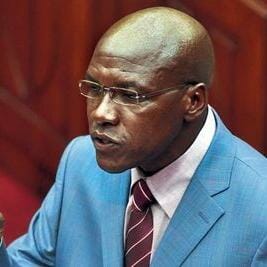 Kakamega Senator Bonny Khalwale and his driver escaped lynching by a mob when the senator’s car knocked a woman down at the Kondoo junction at Burnt Forest Saturday morning.

Police had to restrain angry residents of the area along the Nakuru – Eldoret highway who said Khalwale’s driver was speeding before running over the woman killing her instantly.

“We are investigating the incident which happened at about 8.am,” said Taliti.

Khalwale however said the woman suddenly walked onto the road giving his driver little time to react.

“The lady suddenly walked into the road at Nabkoi junction and my driver was unable to control the vehicle thus knocking her down,” said Khalwale.

Khalwale said he was on his way to Kitale to attend a political rally at the time of the accident.

“I will go back to the area to attend to the matter after the rally but the car has been detained and the driver was also being questioned,” said Khalwale.

He added that police detained his vehicle, a Toyota Prado VX, for inspection.