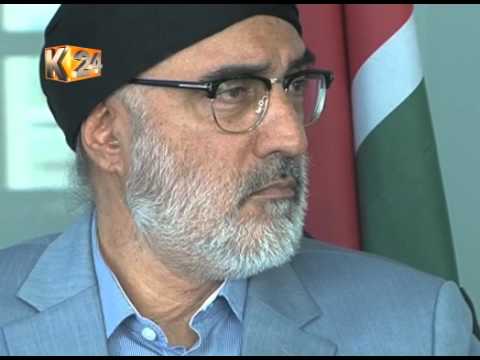 Caption: Rai, the Indian thief who wants to purchase Panpaper primarily to grow his timber business, not revive the factory and create jobs

Were Western leaders bribed to remain silent about the biggest fraud being executed by a bunch of Indian crooks masquerading as investors? Well it seems Kenyans have been duped by the “Advertorial” newspaper Business Daily, that runs articles for highest bidders.

Rai, the Indian thief who owns Rai Group that purchased Panpaper Mills in a deal brokered by the CS crook Adan Mohammed who intimidates Daystar journalists with his fake British accent, is a shareholder of Timsales Group long associated with the Kenyatta family.

So for 900 Million only, Rai wants to own all of Webuye’s property including licenses to cut trees, and also they are forcing the Government to issue title deeds for all properties associated with PanPaper. The reality is that the Indian thief Rai isn’t interested in reviving PanPaper. He wants his timber business to benefit from the many trees that are at the reach of the country’s foremost paper mill that employs and supports the entire Webuye community.

The sale is a major loss for the government, and by extension the taxpayer, who have invested billions in trying to revive the company, which makes the Ksh900 million purchase price a short-change.

According to Business Today, the Eldoret-based group is one the largest timber merchants in Kenya. If the deal goes through, it will mark the end of Panpaper as Kenyans know it since the new owners will be free to do anything with it, including stripping it apart and replacing it with a different business.

But the deal has raised questions, especially given the fact that the paper-making business is being sold to a timber merchant.

One of the conditions was the approval of its licence by the Kenya Forest Service, the government-run organisation that manages and protects government forests in the country. This is the condition that’s causing chills among a number of stakeholders who doubt whether Rai Group’s goal is, indeed, reviving the company, which used to employ thousands of people and sustain the Webuye town economy.

Its second condition is that the National Land Commission issue titles to all untitled properties belonging to Panpaper. This points to the feeling that it would want to fully own the properties, which are its main target in the deal.

The third is that all title documents owned by Panpaper be transferred to the Rai Group. “Its eyes are clearly set on Panpaper land and properties,” says an investment consultant who took part in negotiating the deal for government.

The main concern is that timber harvested from government forests at concessionary prices for paper manufacturing is likely to be diverted to the timber business in which Rai Group can make a fortune from the higher margins. It is not clear if the government has put in place any structure to monitor how Rai utilizes the harvested trees.

This is not surprising. Ahead of the company being advertised for sale, Industrialisation and Entrepreneurship Cabinet Secretary Adan Mohamed announced that the private party which ends up buying Panpaper will be given a lucrative and long-term licence to harvest wood from government forests at subsidised rates. He said that the lucrative offer was being made to whet the appetite of potential buyers.

But Adan Mohammed is not to be trusted. Like any other corporate CEO in Kenya, he is a crook who was sacked from Barclays Bank for a reason.