There is a growing agitation at the Kenya Pipeline Company following Managing Director Macharia Irungu’s scheme to hire his mistress who had been fired over incompetence and tribalism.

Irungu took over as the KPC boss after his predecessor Joe Sang was arrested and kicked out in 2018 with several top managers after they looted billions from the state agency.

The man is doing anything including abusing his office to ensure that one Sharon Kisire gets back her job as the company’s head of human resource and administration.

Irungu and Ms Kisire illicit love affair is the talk at a fast dwindling parastatal faced with massive corruption.looting and poor leadership.

KPC has been recruiting new managers since kicking out the corrupt ones in 2018. 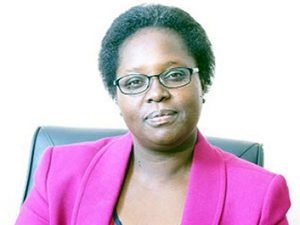 Six general manager positions were advertised on July 7 2020 and immediately followed by the shortlisting process which raised with the HR position being suspiciously re-advertised on September 29, 2020.

The re-advertisement was MD Irungu’s calculated plot to create the return of Kisire who did not even apply for the job during the earlier advertisements in July.

Kisire was reluctant to apply for the job due to the strained relationship between her and the KPC board chairman John Ngumi.

But Ngumi was later moved to the Industrial and Commercial Development Corporation under the KTLN framework opening a gap for Irungu to bring back his lover (Kisire) to KPC.

Disgruntled employees at the have raised concerns with claims that the KPC will revert to old days when nepotism was the norm with  Kisire at helm of HR department.

The re-advertisement was just as a ‘formality’ but Irungu already has his mind made on his ‘lover’ to take the job even before shortlisting is done.

A section of the concerned staff have appealed to the board not to hire  Kisire if the company is serious about resolving the human resource problems it has faced over the years.

Kisire’s turbulent reign in the department was marred with double standards, incompetence and inability to implement any change for the three years she was in the position.

She was behind unfair suspensions and blatant refusal to implement approved organizational structure.