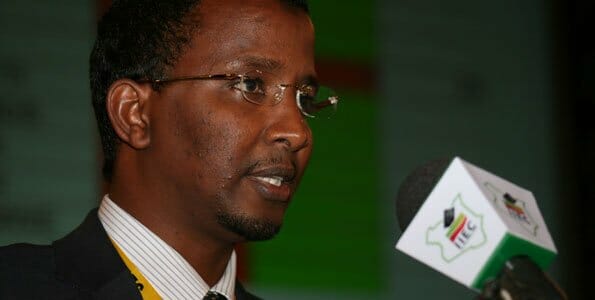 (He (Mr Hassan) introduced me to representatives of Avant International Technology which had interest in the BVR tender in June 2012 during an IEBC retreat in Mombasa who were led by retired Major Idriss from the former Prime minister’s office and three representatives of a local logistics company, the local consortium for the Avant International,” he told the committee.

Mr Ong’ondi, who was sacked by the commission, after he advised against procurement of Evids, also blamed Mr Hassan for going ahead with the procurement despite advise by the ICT department and that of an external IT consultant –International Foundation for Electoral Systems- that the system was likely to fail during elections.

The chairman of PAC Rarieda MP Mr Nicholas Gumbo asked the former official to furnish the committee with any electronic or other evidence, he could find to back his claims, adding the committee would take it that he was speaking the truth since he had been put on oath.

Also mentioned as having allegedly tried to influence the Evid and BVR tenders was IEBC commissioner Mr Mohammed Alawi, who also reportedly introduced Mr Ong’ondi to representatives of a firm, so that it could get favourable consideration.

In what appears like the latest attack on the IEBC boss, Mr Hassan was also accused of disregarding advise to procure 9,750 BVR kits which were enough to register voters, and raising it to 15,000, the former ICT boss said.

Tongareni MP Dr Eseli Simiyu termed IEBC promise to Kenyans that the elections would be electronic, as a monumental hoax, and blamed the commission of going ahead to procure electronic voter identification and transmission systems, which failed during the elections.

“The fact that the commission raised the expectations of Kenyans that the electronic voter devices would work and when they knew they would fail, can only amount to a monumental hoax,” he said.

It also emerged that the country may have gone into the 2013 elections with uncertified voter register after Mr Ong’ondi revealed that due to time constraints, the ICT department had been forced to transfer unverified voter information from the BVR register to the Evids, which means the date may have been inaccurate.

Balambala MP Mr Abdikadir Aden said the use of the unclaimed register could probably explain why many voters found their manes missing from Evids system, even though they had been registered as voters.

The MPs also questioned the credibility of the 2013 elections following the revelations that uncertified voter details may have been fed into the electronic system, which partially worked during the elections, had not been cross checked.

The former IEBC official also told the committee that despite the taxpayer using billions of shillings to procure the electronic devices, they may not be applied in the 2017 general elections, due to “monumental logistical challenges” since each laptop requires at least six batteries which must be charged so as to last the voting period.

Mr Gumbo said the official would be recalled to shed more light on why the electronic results transmission system failed, causing anxiety to Kenyans who expected to follow the live transmission.