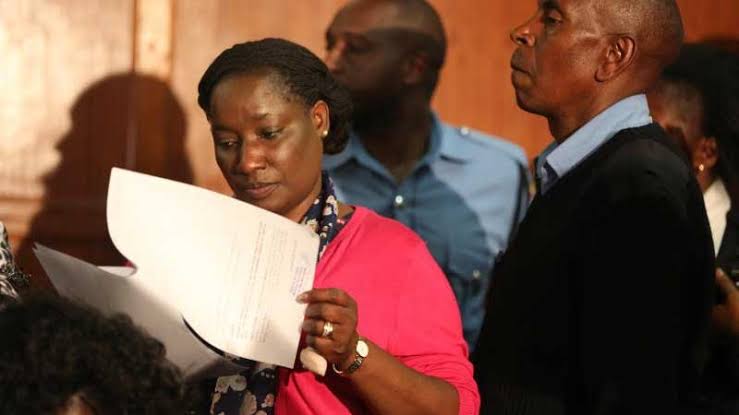 Former Youth and Gender Principal Secretary Lilian Omollo. She was accused of abuse of office after the National Youth Service was rocked by corruption.

The Assets Recovery Agency has urged the High Court to allow the government to confiscate about Ksh. 33 million belonging to former Youth and Gender PS Lilian Omollo, saying the money was obtained from illegitimate sources.

The agency through senior state counsel Mohamed Adow said forfeiting suspect funds would deprive criminals of ill-gotten gains, deter and prevent crime. Mr Adow said the move would be an effective and justifiable way of recovering the proceeds of crimes such as looting of public funds.

In submissions filed in court, the agency said an analysis of the account-opening forms and statements of accounts belonging to the former PS and her companies, established that there were massive suspicious cash deposits, withdrawals and intra and inter transfers to accounts within the same and other banks.

The senior state counsel said investigations further established that the deposits were mainly made in tranches below Ksh. 1 million to evade the reporting threshold and prudential guidelines set by the Central Bank of Kenya.

Mr. Adow said Ms Omollo made various suspicious deposits on the same dates in different bank accounts with the objective of avoiding provisions of the law and regulations.

“The investigations established that there are reasonable grounds to believe that the cash in issue is part of the funds stolen from the National Youth Service and the respondents have not given reasonable explanation to prove any legitimate source of the same.”

Ms Omollo has maintained that no money was lost under her watch and ARA has tabled nothing to prove claims that the monies, which have since been frozen, are proceeds of crime.

“Upon the respondents’ denial of any theft of public funds at NYS, the applicant was obligated to call evidence showing theft or transfer of public funds from NYS accounts by ordinarily producing financial banking records,” she said in the court documents.

But ARA said it has proved that the funds in the said accounts are from illegitimate sources, having being deposited into the accounts with the sole intention of laundering the same.

Another account at Equity in Ms Omollo’s name had Ksh. 1.68 million, while another account registered trading as Sahara consultants held at Diamond Trust Bank had Ksh. 5.65 million and three accounts registered in her children’s names had more than Ksh. 11 million.

Justice Mumbi Ngugi directed the case to be heard on January 20.