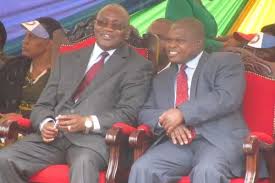 What has always been whispered in low tones as to secret wars between Kisii County Governor James Ongwae and his deputy Joash maangi played out in the open last week to the amazement of Kisii residents.
Kisii County politics took a dramatic turn last week when when their supporters fought openly. It all started on Sunday last week when there was a road accident at Ogembo involving a lorry, a tractor and a matatu where twio people died.
He three top Kisii politicians Senator Chris Obure, Ongwae and Maangi rushed to the scene. As has been his tradition, Ongwae sent his boys to prepare the ground for him fearing that he may be heckled. The first to arrive at the scene was Obure who found the ground very hostile and left without a word. Next was Maangi who braved a hostile section of Ongwae supporters and visited the accident scene in the company of politicians and youths allied to him. As Maangi was leaving, youths known to be allied to Ongwae heckled him and this prompted an exchange between his supporters and Ongwae’s supporters.
The three leaders later in the day met at Nyamache Secondary School for a fund raiser where they joined the area MP Stephen Manoti. It was at this meeting that the political differences played out openly.
Drama unfolded when Obure arrived and refused to take the seat reserved for him next to Ongwae as has been the tradition but chose to sit one chair away from the Governor allowing Manoti to seat between them and Maangi the other side of Ongawe.
It was Ongawe who stole the show when he arrived riding in a motocyle boda boda. This did not go down well with Obure who claimed that Ongwae had gired youths to cheer him as if it was a political rally.
It was Maangi who set the ball running when he demanded that all Kisii leaders must sit down and talk together for the sake of development. Next was Manoti who demanded that Ongwae must account for the Sh7b he gets annually. Manoti went further to comment that he has no problem accounting for the CDF funds and therefore Ongwae should do the same. Obure finished the attack by echoing Maangi and Manoti’s sentiments and demanded that Ongwae must tell Kisii people what he has done for them since his election.
Ongawe feeling that it was Maangi who started the onslaught against him at Nyamache which embarrassed him, he financed people to start a smear campaign against his deputy.
More drama unfolded the following day when there was a scaring scenario when youths in Ogembo bought a coffin and put Ongwae’s effigy and went around the town singing funeral songs and finally buried the coffin.
It is said that Ongawe was so furious and ordered his youths to lock Maangi’s office alleging he was the one behind it. When Maangi’s people heard of the plot to lock his office, they hurriedly planned a counter attack. There was a stand off for hours as the two groups and the situation was saved by police officers who provided security.
Analysts say all these points at what is expected in Ksii county come 2017.
Already three teams are angling for the Kisii gubernatorial seat in 2017. The first team is that of Ongwae and comprises Bomachoge MP Simon Ogari, nominated senator and Omingo Magara.
The other camp is that of Maangi and comprises Obure, Manson Nyamweya, Women Rep Mary Otara and Kisii County Assembly Speaker Kerosi Ondieki.
The third camp comprises Charles Nyachae and comprises section of Kisii professionals based in Nairobi. Majority of Kisii MPS are sitting on the fence as they judge which team they will join. What is clear is that Ongwae is in trouble especially with allegations of corruption and rebellion from his own deputy.