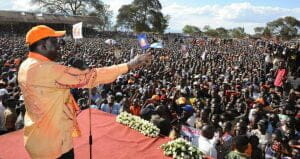 There is a  plan by CORD to use the laptop project promise as propaganda against Uhuru.  In 2017, Uhuru will be carrying the burden of incumbency and all the myriad unfulfilled pledges. One of the pledges is free laptops for primary school pupils.

A slogan “ Uhuru Alidanganya watoto  wa shule “  Is on and this has not gone down well with Uhuru . Some opposition leaders have claimed that cheating children is a sin before God.

In the Bible, Jesus told off those who wanted children to stay away from him and welcomed the children by saying “ The Kingdom of God belongs to them “

If Uhuru can cheat the children, what about fighting and nipping the evils like corruption, impunity and incompetence within government?