The protests witnessed outside the Kenyan consulate in Beirut in August captured the world’s attention after many women who sought the attention of Kenyan Embassy in Kuwait, which is in charge of the Lebanon consulate bore no fruits.

Officials at the consulate have continued to swindle money from domestic workers who save at the office to buy tickets back home, or just desperate for repatriation after the economic recession and the Covid-19 pandemic that has affected many businesses.

In May 2020, The Kenyan community in Lebanon wrote to the Kenyan ambassador in Kuwait, Ms Halima Mohamud, expressing their concerns over the mistreatments by staff who are swindling money from the domestic workers.

Many women who had saved their money at the consulate some amounting to $4,000 (Sh400,000) went to back for their savings but were assaulted or arrested instead.

The victims accused the government and the Embassy of turning a blind eye on them until international media highlighted their story pushing the the embassy to issue a statement. 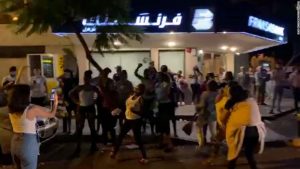 Kenyan women workers protesting outside the consulate in Beirut. [p/courtesy]

The embassy claimed it would investigate the allegations but reliable sources reveal that embassy officials have never visited Lebanon to investigate the matter and not a single staffer at the consulate has been summoned to record statements on extortion.

“ Embassy officials had planned to visit Beirut to probe the matter and obtain evidence. However, due to the Covid-19 pandemic and restrictions on international travel, the team could not travel as hoped, but will do so as soon as possible,” the embassy said in a statement.

Kenyan workers have been seeking help, say from last year but the embassy responded through a letter on July 28.

By the time it issued the statement, many countries were evacuating their citizens from Lebanon but Kenya still ignored their own in a foreign country.

In August they were forced to take to the streets to demand evacuation and the consulate to return thousands of dollars its officials extorted from the women.

They also demanded return of their travel documents and removal of officials at the consulate for insulting and assaulting them whenever they sought services there.

“The embassy has informed all Kenyans in the region that since the airspace was open for commercial flights, those willing to return home should do so at their own cost, and as guided by travel protocols provided by the Kenya Civil Aviation Authority (KCAA),” the embassy said.

This statement came after the women had camped outside the consulate for weeks. Some 12 women were facilitated to travel back after a Lebanese activist jumped. The embassy, consulate or Kenyan government did nothing to help even those with children or pregnant.