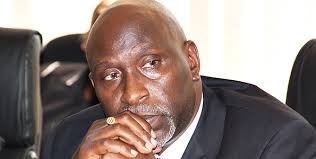 Two senior Gusii ODM politicians are in a celebratory mood after succeeding to block the appointment of CIC chairman Charles Nyachae to the cabinet last week.
In a move seen as geared towards securing their own chances of being elected governors for Kisii and Nyamira counties in 2017 respectively, Senator Chris Obure, Kisii and national assembly member Timothy Bosire, Kitutu Masaba, it has emerged they lobbied among State House officials and relatives of Uhuru Kenyatta to frustrate any plans to elevate Nyachae who had been earmarked for the Devolution ministry that went to former assistant minister Stephen Kiunjuri.
Interestingly, confidential State House sources have lamented to several Gusii opinion leaders that attempts to get the duo to nominate any other deserving son from the community to be given the post in place of Nyachae were fought off instead with both Obure and Bosire preferring the position goes outside the community.
The decision by the two to block Nyachae was to clip his wings and diminish his influence ahead 2017 elections where it is feared he is planning to vie for the Kisii gubernatorial seat on Ford People ticket and also sponsor either Henry Obwocha or new Education cabinet secretary Fred Matiang’i to be Nyamira governor.
Reports from the twin Gusii counties have it that both Chris Obure and Timothy Bosire have fallen out with their respective voters due to poor development record and what some voters say are open cases of arrogance, aloofness, elitism and remoteness and are likely to lose their current elective seats if they dare try to reclaim them in the next general election.
In Nyamira governor Peter Nyagarama is a total failure and anybody who takes on him will win hands down. It is the seat Timothy Bosire is coveting after he found the going tough as he has fallen out with virtually all his top lieutenants including his first CDF chairman, his first bodyguard and a field personal assistant who he has planned with his relatives to give information that can have him arrested and jailed on allegations of defrauding people.
The field PA is on the run but has vowed to join forces with Bosire’s opponents in Kitutu Masaba to unseat him come 2017. Therefore, his move to run away from the constituency contest is to avoid humiliation at the next elections.
More importantly, Obure is said to be going for the governor’s seat to create space for one of his sons to come back and take the senator’s seat from him and later to vie for governor in 2022.
Sources close to Senator Obure say he is so keen to also build a family dynasty of political leaders like his political peers both in Gusii and countrywide. They include: Zachary Onyonka whose son Richard Momoima is MP and Simeon Nyachae whose son Charles Nyachae is set to join politics in 2017. He tried in the past to prop up his half brother Naftally Mogere but the former NSSF managing trustee has been a letdown. He is also trying to bring in his cousin Nicholas Magara to oust current Bobasi MP Stephen Manoti.
In blocking Charles, Obure is said to have used the close links he has with TNA nominated senator Beth Mugo and other members of the Kenyatta family. The two have never forgiven the younger Nyachae for snubbing Raila’s overtures to join the ODM team in Kisii ahead of the last general election.