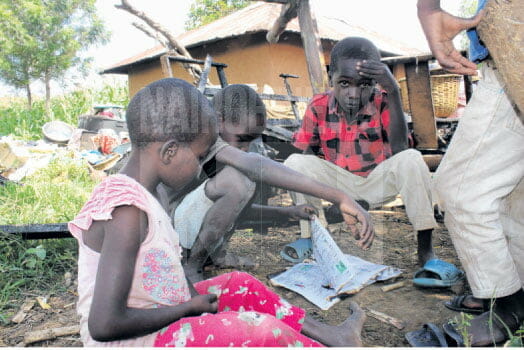 A brave 10-year-old boy on Saturday rescued his two sisters from a night fire that killed his grandfather and two other children at Kajulu village in Kisumu county.

In an act of courage, Ronald Ouma carried his two little sisters out of the burning house and almost lost his life as he returned for two other siblings.

The grandfather died in the 11 pm incident. The siblings had been burnt to death by the time he was back.

Mr Kennedy Ong’alo, Ouma’s uncle, said there were six people in the house when the fire broke out. Mr Ong’alo praised his nephew’s bravery.

All the children, aged between two and five years, had fallen asleep.

Their grandfather, 52-year-old Paul Ong’alo, had also fallen asleep in his chair. His wife said he had come home drunk. He had spent the evening taking alcohol.

The Sunday Nation was unable to talk to the brave boy as he was being treated at Jaramogi Oginga Odinga Teaching and Referral Hospital for minor burns.

According to the uncle, Ouma, a Class Three pupil at Largeslum Academy, was woken up by heavy smoke.

At the time, Ouma was sleeping in a single room house near his father’s. Ouma rushed to open the door of the burning house and carried to safety his two little siblings.

He took them to a neighbouring home and rushed back to save his two other siblings and the grandfather. But he said he found it difficult to open the door.

“He tried to push the door open but was unsuccessful. He screamed and villagers rushed to help him break the door,” Mr Ong’alo said.

This story first appeared on the Sunday Nation