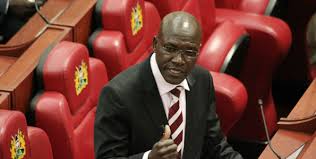 Caption : Bonny Khalwale. His greed for Mullah is Legendary

Was the Kakamega county senator Boni Khalwale paid Sh12.5 million to silence him in his crusade on matters relating to importation of sugar from Uganda and the ailing Mumias Sugar Company saga?That is the question on the lips of many following some sterling revalations to the effect that the maverick former Ikolomani MP has been compromised.

For the good part of last week, talk in the capital city was that the vocal senator had found the middle ground and gone mute. A banking slip from Cooperative Bank of Sh12.5m was being circulated as proof that he had been roped in and silenced. 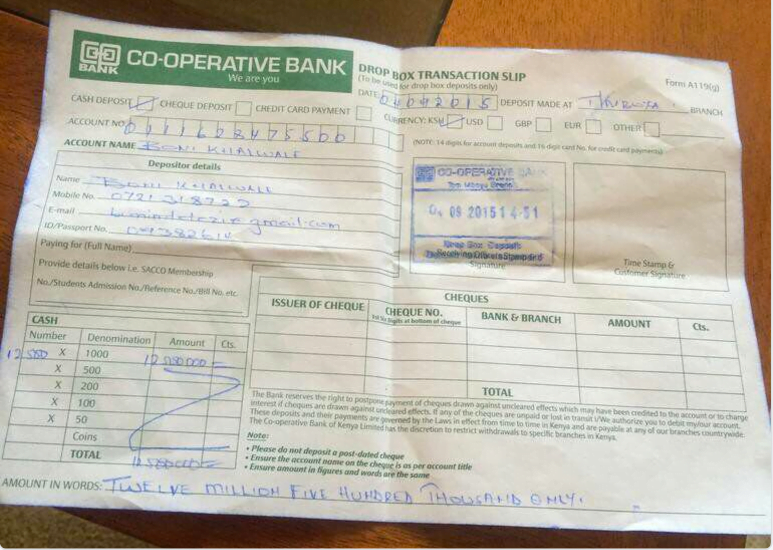 Khalwale had last month cautioned Uhuru Kenyatta he would lose his bid for a second term in office if sugar factories in Western close over the Uganda sugar import deal.

Khalwale without mincing words stated that western leaders were closely monitoring the unfolding events with a lot of interest and were not going to see their factories, which are a source of livelihood to many.

He said the Kenya-Uganda MOU was not a national matter but rather an individual one as it was never discussed nor even mentioned to other government and legislators from the sugar belt zone.

“This is a plan to silently kill Mumias, Nzoia, Butali and West Kenya mills in return to the Uhuru exporting his Brookside Dairy milk that only benefits him and his family to Uganda and threatened to mobilise youths from western region to block all the roads that Uhuru’s lorries uses to transport milk to Uganda so that he also feels the pinch they will be feeling. “I assure you your milk will not reach Uganda Mr President,” thundered Khalwale.

He assured farmers that he will continue to protect and fight for their rights no matter what, lamenting that other leaders from Western who should be joining him in the fight have freaked out.

He warned farmers from Mumias against expecting much from the government as the Sh1 billion bailout was only but a bluff meant to make them feel that they were being assisted and yet it had led to the signing of a sugar importation deal with neighbouring Uganda.

In the Mumias matter, Khalwale is in court with Nairobi governor Evans Kidero over a defamation case in which the Nairobi governor has sued him. Kidero wants Khalwale to pay him damages for linking him to the current problems bedevillimg Mumias Sugar Company where he once was the chief executive.

The question is: did Khalwale receive Sh12.5 million to go mute on the sugar issue? It is alleged Khalwale was paid the money in cash during a secret meeting in, Arusha, Tanzania in the company of two other senators.

It is said Khalwale could not bank the money in Tanzania since the country has strict laws regarding money laundering. This forced Khalwale to carry the money all the way to Nairobi where he is said to have banked it in his personal account at Cooperative Bank, Tom Mboya Street.

Had Khalwale attempted to bank the money while in Tanzania, he would have been arrested and charged with money laundering. Had that happened, he would have become the second Kenyan politician to face such charges in that country.

In April 2013, businessman Don Bosco Gichana was arrested by Tanzanian authorities for conspiracy and money laundering. He was arrested for defrauding the Tanzania government TSh6b.

They say politics is propaganda and whether Khalwale was paid or not, those behind the move have achieved their goal. In his own home turf of western, the payment spread like bush fire and was the talk left and right with even claims the self-proclaimed defender of the poor had become a wolf devouring them.

There were even claims Khalwale stopped spitting fire over sugar related matters once he allegedly pocketed the money. Mumias East MP Ben Washiali was overheard complaining that Khalwale has abandoned the fight to save Mumias Sugar from total collapse.

Washiali had at one time alleged that Khalwale must have received goodies to silence him. He went on to complain that Khalwale has not been serious with the defamation case against Kidero.

A bitter Washiali last week complained bitterly that he went to court last Friday in a show of support for Khalwale, but that neither the senator nor his lawyers turned up for the hearing of the case. “This is when I confirmed that, indeed money had exchanged hands between the two leaders and mtetezi wa wanyonge was not to be trusted anymore,” he said. He claimed that Khalwale has proven to be a cheap leader who can no longer be trusted.

Some Cord and UDF legislators have been complaining that Khalwale has abandoned a noble cause to help revive MSC and chosen to line his pockets. The MPs claimed that they were shocked that after standing with Khalwale in court, and even being roughed up by goons in Nairobi, where they were forced to seek refuge in a toilet, Khalwale now never utters a word concerning the plight of sugarcane farmers. It is alleged that sugar barons contributed the money to bribe Khalwale. The importers reportedly saw Khalwale as the stumbling block to their schemes to mint billions easily.

But allies of the senator have dismissed the allegations saying it is propaganda initiated by Stanley Livondo at the behest of Governor Wycliffe Oparanya.

They argue Khalwale could not have risked to carry the money to crime-prone Tom Mboya Street when Cooperative Bank has branches in secure places like Westlands, Ngong Road and even the city centre’s prestigious Cooperative House headquarters.

By late last week, word had it that Kenya Revenue Authority was closing in on Khalwale to explain where he got such huge amount of money to bank in one day.

For now, whether he received it or not, Khalwale needs to go back to the drawing board to undo the damage that has been done. He needs to verify if the receiving cashier stamp is genuine, whether mobile number 0721318722 is his and the email address on the bank slip is indeed his too.