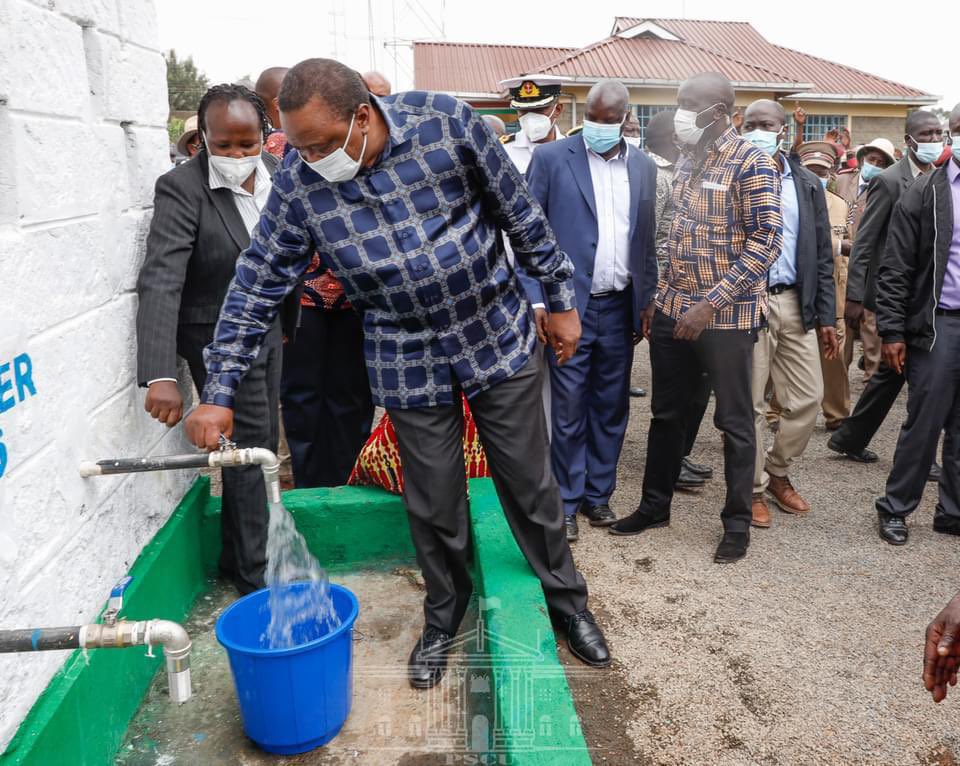 As he sought to intensify the campaign for the Building Bridges Initiative, President Uhuru Kenyatta was on Friday engaged in a working tour of the Nairobi metropolis where the Head of State launched several healthcare, roads and water projects.

Some of the projects included the Uthiru-Muthua Health Centre in Kabete and Kiamaiko Dispensary developed by the Nairobi Metropolitan Service (NMS) in Mathare constituencies respectively.

But according to Gatundu South Member of Parliament Moses Kuria, some of the projects which the President inspected had already been launched in the past by MCAs and other local leaders.

In a post shared across his social media accounts, Kuria claimed that one of the water fetching zones which Uhuru ushered in Dagoretti was actually inaugurated by Waithaka Ward  MCA Bishop Kiragu over 6 years ago and that it was only repainted weeks ago ahead of his visit to the area.

Attached to the post were two photos: One from when the project was initially launched in 2014 and the second from when Uhuru re-launched it just yesterday.

“Stop misusing my President,” read part of his caption.

My good friends from NMS are overworking. My friend Waithaka MCA Bishop Kiragu launched this project in 2014. Yesterday they repainted it and got H.E to launch it. Stop misusing my President @WehliyeMohamed @kipmurkomen @ahmednasirlaw @SakajaJohnson pic.twitter.com/IKsRlzGkmc

Addressing residents after commissioning the facilities, President Kenyatta emphasized that his focus is the delivery of projects that will uplift the lives of Kenyans across the country.

At the same time, he censured politicians whom he said are using doublespeak to divide Kenyans for political wins, saying the country requires unity and development, not petty divisive politics.

On Thursday Badi and Nairobi Deputy Governor Anne Kananu had inspected some of the facilities ahead of their official opening by the President.