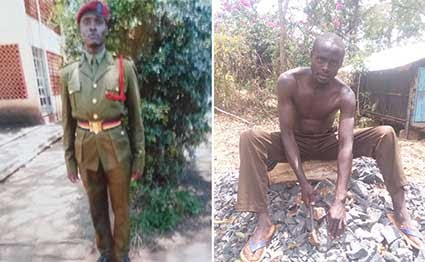 The highly trained 28-year-old was suspended from his job in 2016 after he delayed his return to work following a trip to his village where he had gone to attend to his wife who was suffering from throat cancer and sadly passed on the same year.

A depressed Nicholas Langat could only find solace in alcohol as the pain of losing his wife stung harder with each passing day.

His wife left behind a two-year-old daughter.

Langat says that his suspension letter was sent to Ainamoi Police Station in Kericho County which is his rural home. The suspension meant that he had not been dismissed and that he remained a police officer who couldn’t find employment anywhere else.

Due to the circumstances, Langat was forced to do odd jobs like digging pit latrines and crashing stones at a local quarry in order to sustain his alcoholism and take care of the little girl his wife left behind.

While speaking to a local Kenyan daily, Langat said that alcohol had completely destroyed his life and that he is now willing to change his ways and live a normal life with the hopes of getting back to his former job.

“I have gone through hell due to drinking and I feel that I’m tired of this life. I would love to go back to my normal life and get back to my job if it’s possible,” Langat told the local daily.