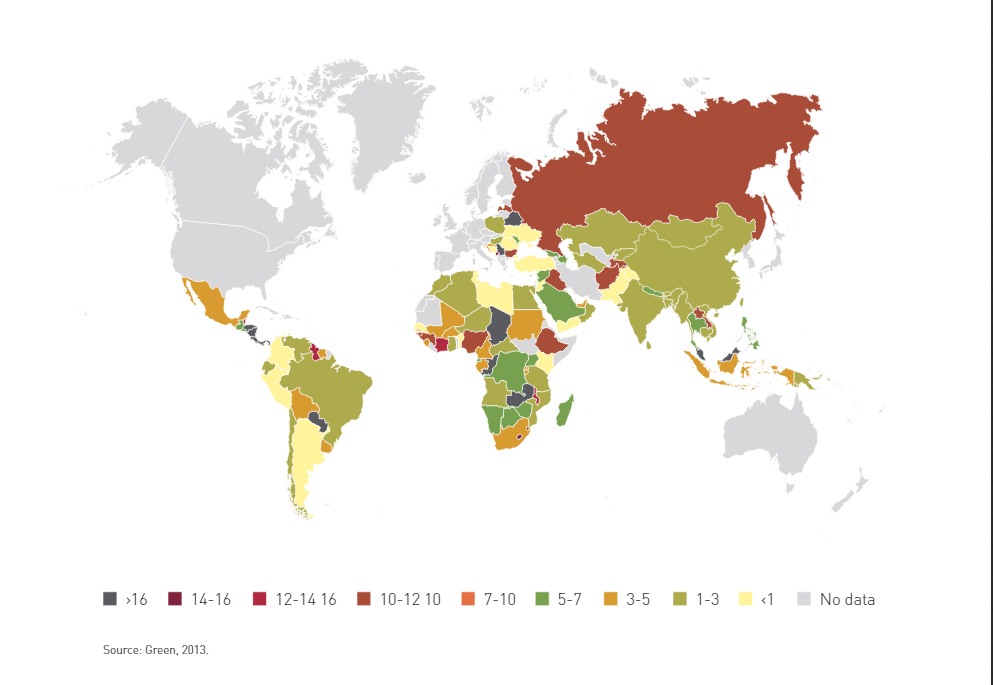 Over the last 50 years, Africa is estimated to have lost in excess of $1 trillion in illicit financial flows (IFFs) (Kar and Cartwright-Smith 2010; Kar and Leblanc 2013). This sum is roughly equivalent to all of the official development assistance received by Africa during the same timeframe.2Currently, Africa is estimated to be losing more than $50 billion annually in IFFs. But these estimates may well fall short of reality because accurate data do not exist for all African countries, and these estimates often exclude some forms of IFFs that by nature are secret and cannot be properly estimated, such as proceeds of bribery and trafficking of drugs, people and firearms.

The amount lost annually by Africa through IFFs is therefore likely to exceed $50 billion by a significant amount. These outflows are of serious concern, given inadequate growth, high levels of poverty, resource needs and the changing global landscape of official development assistance. Although African economies have been growing at an average of about 5 per cent a year since the turn of the century, this rate is considered encouraging but inadequate. It is, for example, below the double-digit growth that has propelled transformation in parts of Asia. Further, the benefits of this growth have mostly been confined to those at the top of the income distribution and it has not been accompanied by an increase in jobs. Aside from the equity issues that this raises, it also means that this growth may not be sustainable due to possible social unrest.

The global commodity super-cycle that has contributed to Africa’s growth is coming to an end, while macroeconomic factors such as debt reduction might be a once-off effect. Poverty remains of serious concern in Africa in absolute and relative terms. The number of people living on less than $1.25 a day in Africa is estimated to have increased from 290 million in 1990 to 414 million in 2010 (United Nations, 2013). This is because population growth outweighs the number of people rising out of poverty. Moreover, GDP per African was around $2,000 in 2013, which is around one-fifth of the level worldwide (IMF, 2014). Poverty in Africa is also multidimensional, in the sense of limited access to education, healthcare, housing, potable water and sanitation. This situation puts the loss of more than $50 billion a year in IFFs in better perspective. The resource needs of African countries for social services, infrastructure and investment also underscore the importance of stemming IFFs from the continent. At current population trends, Africa is set to have the largest youth population in the world. By 2050 the median age for Africa will be 25 years, while the average for the world as whole will be about 36 years (United Nations Population Division, 2012).

Infrastructure constraints also act as a brake on growth, just as do the low savings and investment rates of the continent. In 2012 gross capital formation rates in Nigeria and South Africa were 13 per cent and 19 per cent, respectively, as compared to a rate of 49 per cent in China and 35 per cent in India (United Nations Statistics Division, 2014; World Bank, 2014). Yet Africa is estimated to need an additional $30–$50 billion annually to fund infrastructure projects (Foster and Briceño-Garmendia, 2010; African Development Bank, 2014). The Panel considered that when these needs are coupled with the changing landscape of official development assistance, Africa cannot afford to remain sanguine about the problem posed by IFFs. Current developments in the global arena in fact make the challenge posed by IFFs more acute.

The resources that Africa receives from external partners in the form of official development assistance are stagnating due to the domestic fiscal challenges of partners, who in response are seeking to reduce such expenditures. Africa will therefore need to look within the continent to fund its development agenda and reduce reliance on official development assistance. IFFs are also of concern because of their impact on governance. Successfully taking out these resources usually involves suborning of state officials and can contribute to undermining state structures, since concerned actors may have the resources to prevent the proper functioning of regulatory institutions