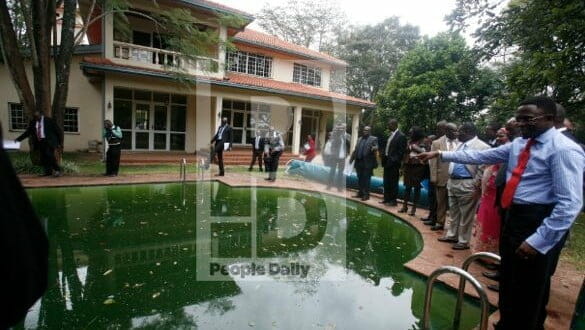 The future of Ababu Namwamba as chairman of the powerful Public Accounts Committee in parliament hangs in the balance after serious allegations of impropriety in looked against Chapter Six of the constitution on the integrity and leadership. To survive, the embattled Bundalangi MP and ODM secretary general is said to be reaching out to deputy president William Ruto to rescue him from an imminent puncture to his political career that may serve him a severe blow.
Ruto and Namwamba have been close since their days in ODM. Last year, during the controversial ODM national polls, it was claimed the Namwamba camp enjoyed support and financial backing of Ruto.
In Pac, Namwamba is being accused of corruption, getting bribes, allocating himself many foreign trips and failing to delegate duties to committee members, thus running a one-man show. Already, pictures are circulating in parliament of a multi-million house the MP has constructed in Bundalangi said to be from bribes.
The house project is said to have been started immediately he landed the plum PAC slot and was constructed within months.
The trouble at PAC began when Ababu and his chosen few are said to have doctored a probe report on the loss of billions of shillings from the former Internal Security ministry.
Namwamba is said to have pushed for the clearance the former permanent secretary Mutea Iringo who was adversely mentioned. The report in favour of Iringo was sneaked in against a section of members.
The controversial report had revealed how senior Internal Security ministry officials used a secret account at National Bank of Kenya to siphon billions of taxpayers’ money from public coffers in the run-up to the 2013 general election.
The report reveals how the Auditor General unearthed the existence of a secret account at National Bank where Sh2.8 billion was wired and spent on items marked as ‘confidential’. At first, Pac wanted officials who have previously served as permanent secretaries in the Internal Security ministry be held responsible for presiding over the scandal but later cleared them.
Francis Kimemia, later the Head of Civil Service and Iringo were the accounting officers in the Internal Security ministry in the year ended June 2013 covered by Pac’s audit report.
What is raising eyebrows is that even as Namwamba cleared the OP-based cartel, Uhuru Kenyatta has personally admitted the existence of powerful cartels in government, including his office, whom he accuses of working at the behest of shadowy investors to fleece the taxpayer. Pac members have appended their signatures in a move to replace their chairman.
The trouble for Namwamba is that the plot to oust him is being pushed by both Jubilee and Cord MPs and as such he is an isolated man. Pac according to parliamentary standings must be chaired by an opposition MP.
Already, names of possible candidates to replace Namwamba have been floated. Those mentioned as possible candidates are Edick Anyanga, Ahmed Abbas, Junet Mohamed and Manson Nyamweya.
Abbas is an accountant and is the man Jubilee members are comfortable with. However, those opposed to him say Aden Keynan, the chairman of another influential committee – the Public Investment is from the same region and religion. To compound matters is the fact the leader of majority in parliament has roots in the same area.
It is on these grounds the anti-Namwamba forces want a face outside North-Eastern to replace him. Within ODM, Junet is being favoured by virtue of being party leader Raila Odinga’s lieutenant.
Before his election as Pac chairman, Namwamba had defeated Anyanga with 16 against 10 votes. It is not, however, known if Anyanga will contest again should the plot to oust Namwamba succeed. So far, 19 MPs out of 27 have appended their signatures supporting the removal of Namwamba. The 19 are from both Cord and Jubilee.
Apart from claims of bribery, Ababu is being accused of doctoring and leaking reports with an aim of sabotaging parliamentary committee reports. Parliamentary rules are clear that once a report is leaked, it becomes of no value. In Namwamba camp is deputy chair Cecily Mbarire. She is said to be the link with powerful forces in Jubilee who are out to control the happenings at Pac. Her links in the corridors of power is Devolution secretary Anne Waiguru. A source within Pac revealed how they are out to find illgoings at National Youth Service where tenders have been awarded to politically correct individuals among them political analyst Mutahi Ngunyi and one Mike Njeru.
Pac is accused of being a money minting machine and even doctored a report on the controversial hiring of a jet for Ruto’s tour to West Africa. Also under siege are MPs known to have pocketed bribes from people adversely mentioned to Pac. Sources say one MP Manson Nyamweya allegedly gave out at least Sh4 million to have a report changed. Mbarire is linked to having allegedly brought Sh10 million in a deal to have another report shelved in favour of some of those who were adversely mentioned.
Namwamba and his team took millions of shillings in bribes in order to change the recommendations of certain reports on various dates, it is claimed. The Pac core responsibility involves the examination of the accounts showing the appropriations of the sum voted by the House to meet the public expenditure and of such other accounts
The following are the Committee’s full membership. Namwamba (chairperson), Mbarire, (vice chairperson), Joseph Manje, Jude Njomo, Joel Onyancha, Kareke Mbuiki, Gonzi Rai, Julius Melly, Jackson Rop, James Bett, Fathia Mahbub, Mathias Robi, Stephen Manoti, John Sakwa, Arthur Odera, Edick Omondi Anyanga, Junet Sheikh Nuh, John Mbadi, Kyengo Maweu.
Silvance Osele, Manson Nyamweya, Alice Chae, Mwadime Andrew, Abass Ibrahim, Geni Mong’are and Jessica Mbalu.