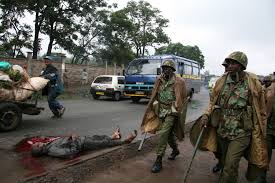 Over and over again we hear cases of extrajudicial killings by death squads and rouge police in Kenya’s ghettos. The administrative murderers have been protected by a system that has endangered anyone speaking about it on-ground let alone witness to it. We have watched threats, abductions and killings of known activists who have organized around these killings.
On 17th May yet another victim, 17 year old Stephen Gichuru was shot five times after pleading for his live in broad daylight at 8am in Kiamaiko, Mathare by two officers from Huruma Police.
As a followup to this killing, mourners who were making arrangement for the final sendoff of the young man extra-judicially killed by known police officers from Huruma Police Station were attacked by the same officers, who threatened to kill mourners including HRD ( Name withheld ) . Shots were fired at those gathered on the night of 25th May 2015 at around 10pm
The HRD had already petitioned human rights organizations as well as Independent Police Oversight Authority (IPOA) and Kenya National Commission on Human Rights (KNCHR) respecting the extra judicial killing and threats to HRDs and family of the deceased on the same day that this incident took place
Three of the mourners were beaten, seriously, injured and arrested by the officers. They have been detained at Huruma Police Station and have not been allowed to access medical assistance. Another mourner, five month pregnant was thoroughly beaten and was taken to Kenyatta hospital where she was treated and discharged.
Please loudly condemn this brutality and criminality and demand for justice and accountability. Your intervention for the incarcerated and the injured also urgently required because you are the only Voice, you …The social media user .
IPOA is yet to investigate this because they are busy telling us how Monica Juma used to write them Rude letters.
Share Widely, Tag leaders and condemn this