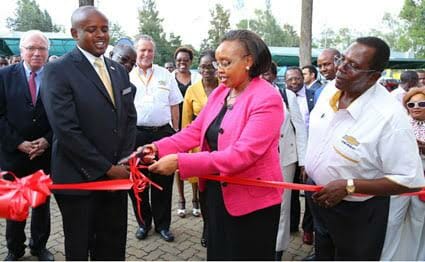 In our continuing series profiling corruption at Sport Stadia Management Board (now Sports Kenya), we now focus on the exact role that Tourism Cabinet Secretary Phyllis Kandie has played in ensuring that Pewin Motors Limited Chairman Peter Kirigua wins a recently advertised football tender.
In the request for proposals for a partner to form a Special Purpose Vehicle for the organization of the Magic Cup Tournament, where top European teams will be invited to Kenya to play against their local equivalents, a special tourism component was added.

“The partner is expected to deliver a proposal on how he intends to deliver the objectives in readiness for launch and official announcement of the participating teams during the 2015 World Travel Market Expo in London in November. Understanding of and responsiveness to RFP and concept plan.”

The World Travel Market Expo in London is arranged under the auspices of the Tourism ministries in every participating country, meaning that the only way this project would be announced at that venue is through collaboration with Phyllis Kandie.
Peter Kirigua who is known to have deep ties with the Tourism CS has introduced her to the conman called Kenneth Mathiu, who together with an assembly of white fraudsters operating under the banner of OpenSide Sports UK, held several press conferences with local media, claiming to have links with Arsenal. Worst of all is that Sports Kenya CEO paid all their expenses as regards to flights, hotels and allowances while in Kenya, yet all they presented was a forged letter claiming to have links with Arsenal and Borrusia Dortmund.
Millions have been wasted, pilfered and embezzled by Gabriel Komora, whom we recently discovered is the younger brother of Former StateHouse Comptroller Hyslop Ipu.
The first match was slated tentatively for July 2013, but two years down the line, and a payment of USD 500,000.00 (or Kshs. 50 Million) later, Mathiu is still promising Government officials heaven-on-earth.
Arrested Development
Sports Tourism is indeed emerging as a critical vehicle for cleaning up the images of countries wrecked by travel advisories like Kenya. But due to greed and corruption, incompetent Government officials like Tourism CS Phyllis Kandie always think with their stomach’s and not with their brains. They follow the people who will give them money (as if they aren’t overpaid already) in what is referred to in Kenya as “primitive-acquisition.”
Together with Sports Cabinet Secretary Hassan Wario (who’s role we will profile later) they have endorsed a conman Kenneth Mathiu, a vehicle dealer Peter Kirigua and a golf-manager Sam Mwai, to execute a football project.
In an interview with a local newspaper, Sports Minister Hassan Wario lied to the public that hosting Arsenal was going to be a very expensive undertaking, and used the excuse as a reason for cancelling the proposed match, despite the fact that sponsors like Equity Bank had committed to title-sponsor the match.
Government Cancels Arsenal Visit to Kenya
What Wario didn’t want to admit is the fact that OpenSide Sports, and their representative Kenneth Mathiu were fraudsters, who ripped off the country and are still walking free, meeting senior Government officials including Deputy President William Ruto. They have even gone ahead and re-invented themselves using Pewin Motors Group and Icon Sports Marketing Limited.
Quoting the famous Jeff Koinange, “you can’t make this stuff up!”
More about this Scandal Coming
Would you like to get published on this Popular Blog? You can now email Cyprian Nyakundi any breaking news, Exposes, story ideas, human interest articles or interesting videos on: [email protected] Videos and pictures can be sent to +254 710 280 973 on WhatsApp, Signal and Telegram.