Mr. 10% Michael Joseph was recently appointed as Kenya Airways Chairman. What many of you don’t know is his nickname (Mr. 10%) was acquired for his reputation of demanding/extorting 10% kickbacks from tenders he awarded people at Safaricom.

Mainstream media journalists were bribed to stage fake “optimism” at his appointment, yet this idiot is an old fucker who should be retired and deported out of Kenya. And to even imagine that they once Titus Naikuni as a viable presidential candidate. Sick!

Whatever you do Kenyans, don’t trust the mainstream media, especially any reports done by the Nation Media Group and Royal Media Services, two companies that are an extension of the Jubilee Government’s propaganda machinery. Be like Americans who went against the Hilary-media euphoria.

We came across an issue raised by Joyce Murigi, a passenger of Kenya Airways. She was treated with contempt and her issues mishandled by the incompetent KQ staffers.

Read the article below and understand why you shouldn’t trust Michael Joseph and Mbuvi Ngunze, both of whom should leave Kenya Airways immediately. They’re now on holidays with their families, enjoying, after plundering our airline.

Feeling sad…bitter and harassed! KQ at it again…shame on you the Pride of Africa!

We booked a flight with Air France that was scheduled to leave on 30th at 11.30pm. This was being operated by our notorious airline, KQ! Went to the airport and as we checked in we were told that the flight was delayed to the following day at 6am.

Question, why was this not communicated to the Passengers in good time?

Accepted and went back home. 3.30am we start our journey to JKIA and get there on time. Checked in and ready to board.

Boarded but left after 6.30am. Good and smooth flight, excellent Captain and staff. When we were about to land in Paris the Pilot was advised to land in another airport in Paris due to fog which hindered visibility. Fair enough…as we approached the second airport, a message came through that even this one was experiencing serious weather issues and the Pilot was advised to land in Schiphol Amsterdam, so far so good. We land in Amsterdam at 2.45pm local time, our scheduled arrival time in Paris was 12.30pm.
Real drama starts here!!

Wazungus who look like they know their rights can’t understand why we are locked in an aircraft for more than an hour simply because Amsterdam’s authorities could not authorise us to disembark…after negotiations we are let out…some wazungus almost fighting the crew and hurling insults cause of frustration.

We get out and are advised to go to hall 2 for briefing and pick our luggage from belt 9. We go to the Passport control, queue and at the desk we are told we need day visas to access hall 2 and the belt. All the wazungus were not affected by this as they probably had EU passports. We are asked to go to the security. Here they have no clue as to what was happening. They say for day visas, we have to get new tickets.

Meanwhile all the other passengers are now being taken care of by the KQ Station Manager in hall 2 and transportation by bus to Paris arranged for hundreds of them. But about 12 Kenyans going to different destinations are now stranded and locked in at the Passport control hall.

To get new tickets we have to go to KLM transfer desk but we can’t leave this hall unaccompanied by security who will only take 5 at a time and the walk is long. Secondly it is not their headache so they are not in a hurry. To go to the transfer desks we must go thorough a security check. We go thorough this, to the transfer desk and here there is no information about us so we can’t get tickets. We are told the passport control was given a list of our names and with that we should get visas. We go to the passport control hall, once in remember you can’t get out.

After explaining our case, the security says they can’t help, KQ needs to handle the process. We are again advised to go back to the transfer desk…remember we must be accompanied and go through security…we did 4 trips like this before we could get help. Abandoned and on our own…we manage to get new flights for today but can’t leave the Airport cause we can’t get day visas as we were not supposed to land here and even under special conditions this needed to be handled by KQ. Shops closing, lounges closing… It is now 10pm. Homeless, “illegal immigrants”….

For fault that was not ours…we picked a letter from KQ…attached. There was no provision for our category in that letter, it is not signed, there is no apology, they talked about us getting our own accommodation, and money compensation on the room charges… Note in the letter they acknowledge the accommodation being limited and that is why they could not arrange. 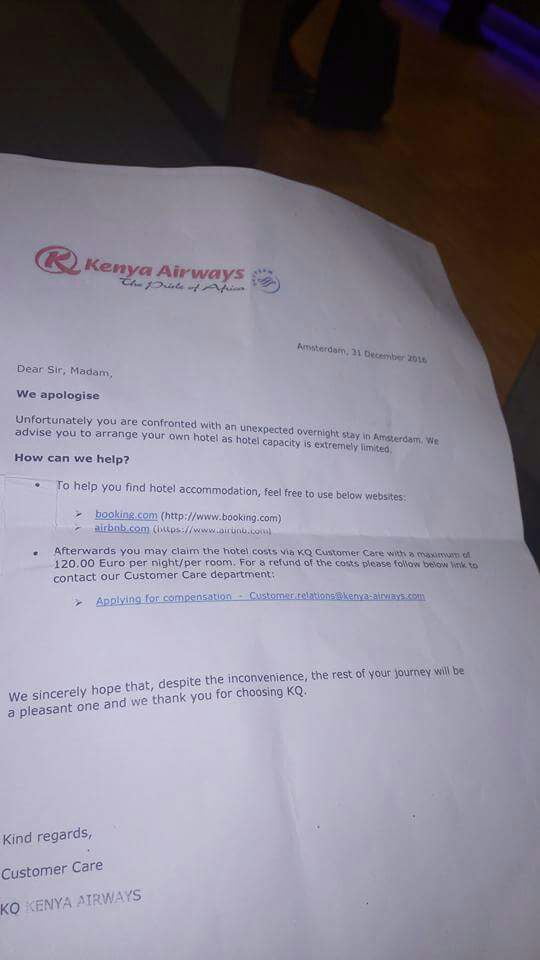 So we don’t live here, if they were unable to get, then how could we get? However, they didn’t think about us who could not access the accommodation, we couldn’t get our luggage either.

KQ, surely why is your Management so unprofessional, so uncaring? Where is your PR? Question? Who will compensate us for the inconvenience? Harassment? Sleeping in the cold? Being subjected to ” illegal immigrants status”? My advise to the Kenya Government, if you do not salvage KQ, the country will lose a lot.

As it is now, many valuable travellers have no faith in the Airline. Something needs to be done urgently! Total overhaul of the Management team. They are extremely insensitive! Will only be able to get to my destination two days after my scheduled flight.