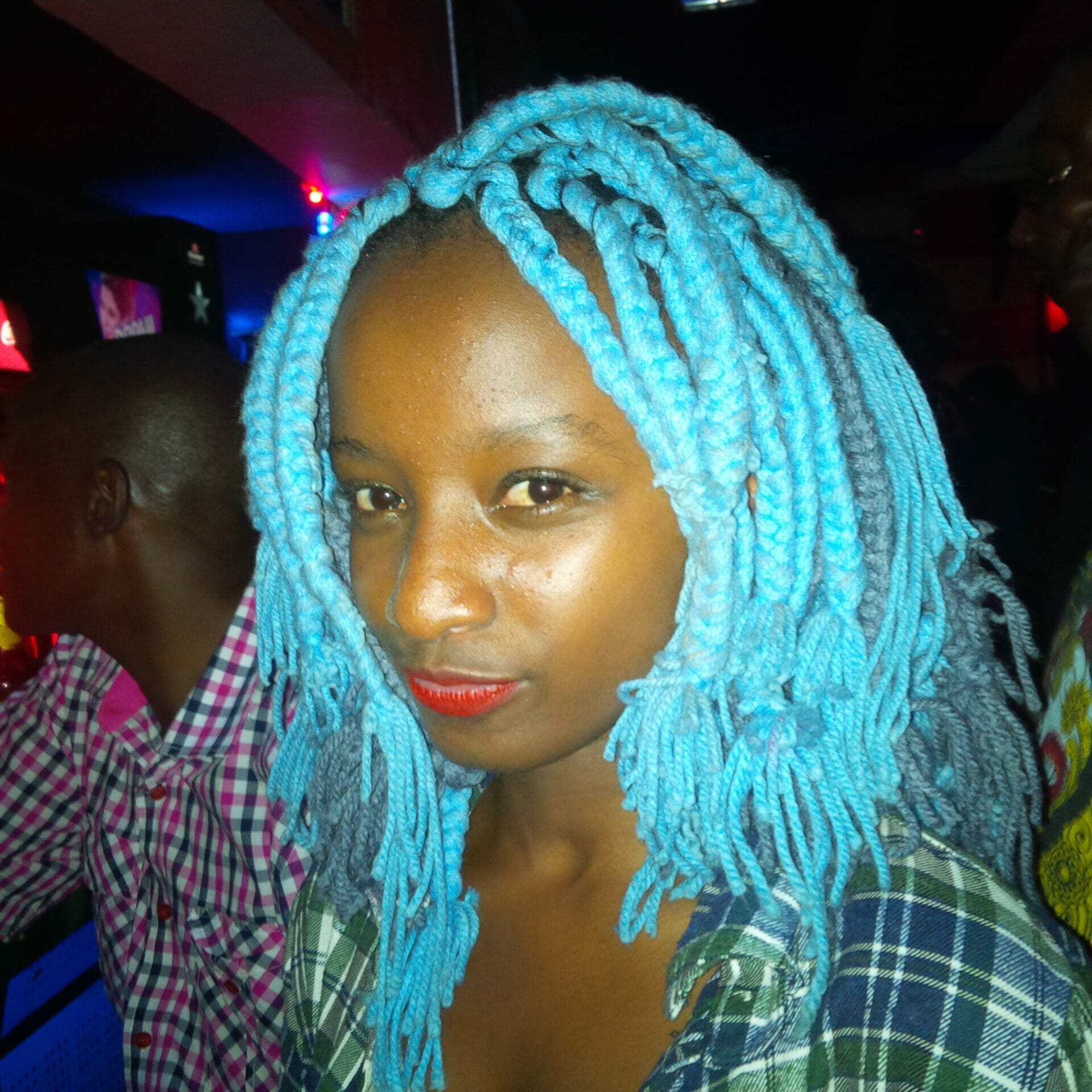 Caption : Is this the most bizarre hair-styles ever seen in history ? Nyakundi analyzes .

Like a rare sighting of a comet, today patrons at Don Williams Bar & Restaurant off Garissa Road in Thika’s Industrial Area witnessed one of the most bizarre hair-styles ever seen in the history of mankind.

An unknown lady was pictured in out of this world braids. Members of a popular Facebook page M.A.W.E (Men Against Weaves Empowerment) that scoffs weave-wearing women might be shocked to discover this lady’s hairstyle, which has been done using embroidery-thread (for the hapless ones that had to endure home-science classes at the bogus Moi-curriculum 8-4-4), might be more atrocious than the weaves they deride on their wall.

The colors blue and white are synonymous with Wiper Democratic Party which is the first hint  that she could be a member of the Kamba community. Or maybe not. Whatever the case, we hope Party Leader Stephen Kalonzo Musyoka will make an effort to trace this lady and endorse her as Wiper’s official mascot. 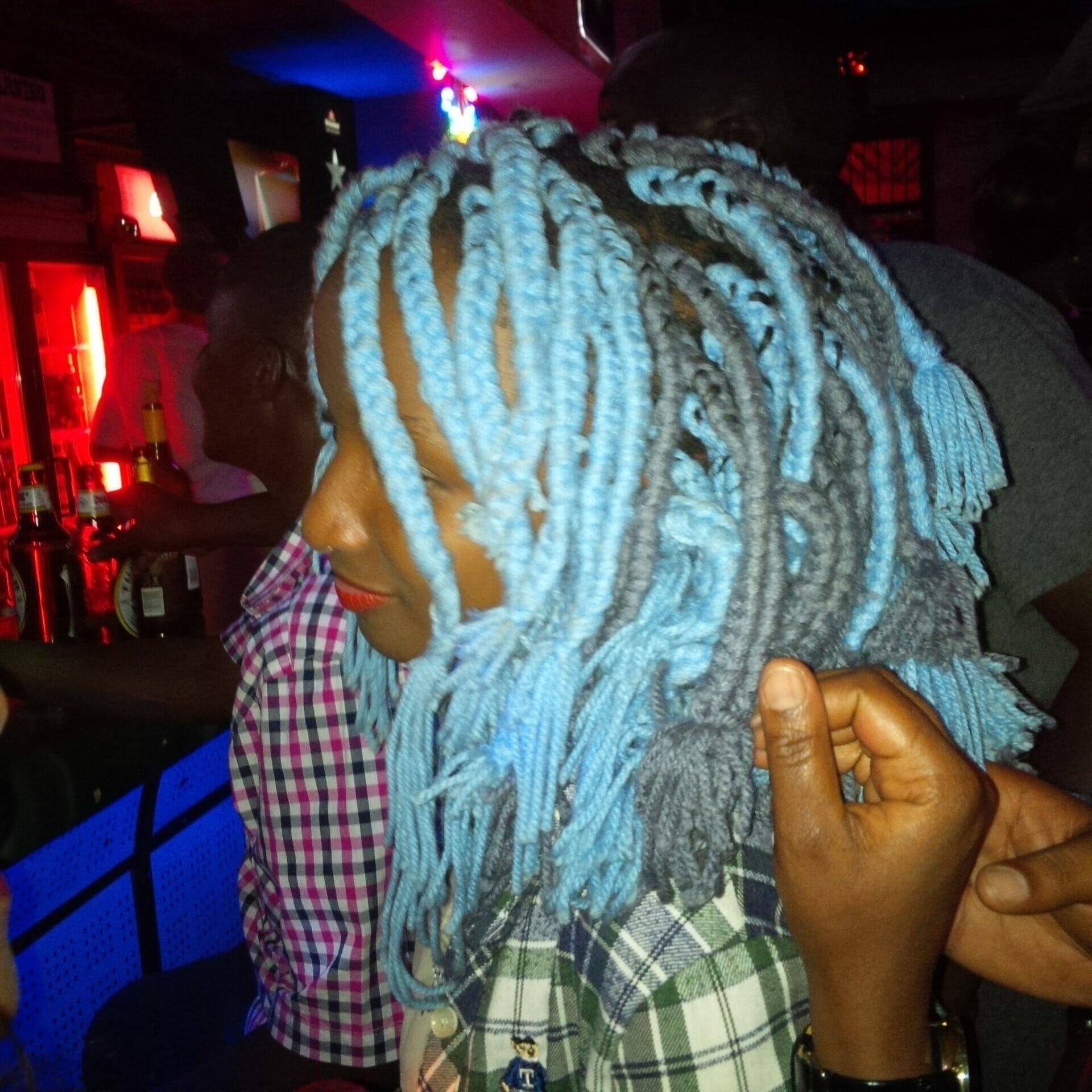 Weaves in Kenya have gained a foot-hold but are largely shunned by women that  seek to maintain an image of intellect. There are different types of weaves in the market. For instance;

1. There are weaves which ladies have, that immediately indicate that they are the thugs who spike drinks with a sleep-inducing drug (mchele). Bars along Thika Road like Jambo Grill, Maxland and Natives are permeated with those grassroots type of commercial sex workers.

2. There are high-tech human-hair weaves like the ones worn by Lillian Muli, Vera Sidika and the likes, that connote that yes, I can have sex with you, but you must pay well. Preferably in US Dollars since the Kenyan currency has been devalued since Uhuru got into office and executed the Eurobond Heist that was meant to stabilize forex rates. This zone is normally for the older generation of men, who are willing to embark on crazy financial decisions like paying rent, weekend trips to Dubai and the likes. We do encourage young men to avoid this section like the plague as the women in this category can consume your finances and you end up broke. Jared Nivaton the chairman of Shabana FC is broke after liaising with Muli. Poor bastard. 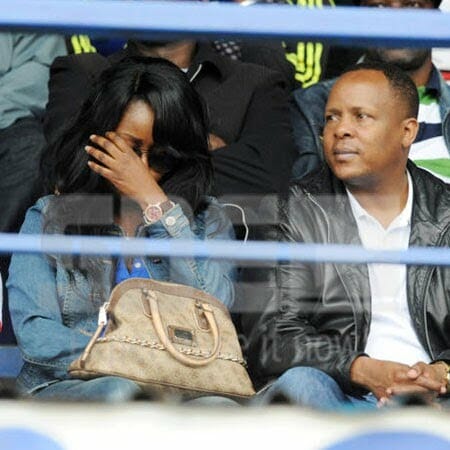 3. There are normal hair-extensions for normal women, who simply want to look good. Those are ok. Maybe the hair doesn’t grow as fast, or they want to match a certain dress.

4. There are braids and if done professionally, are a splendiferous reflection of a legit chic. There are tiny ones that cost a fortune, take long, but are nothing but awe-inspiring. Unfortunately, not many women have the time to sit and get braided for an entire day.

5. There’s team natural which recently ran a hashtag #MyBeautifulUnkemptHair. Liberals, feminists, intellectuals and super-spiritual women fall under this category. To pick her up, take her home with you, your talk-game has to be strong. They normally don’t peg concession of their sexual organs on monetary grounds but on conversation. If she has fun, if you don’t make her feel twitchy, if you don’t touch her indecently and if you aren’t too aggressive, she will be “already too willing” to go home with you. This is where young upwardly-mobile men should be. As men who may have intellectually-stimulating conversations are less, these women tend to liaise less with men, meaning that their “goods” are in top-shape. A1.

If you didn’t know, now you know.