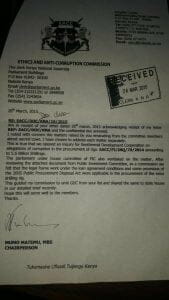 An anti-graft agency chief has raised alarm over a forged letter to National Assembly clerk purporting to absolve the Geothermal Development Corporation officials from investigations.

“I never authored the purported letter to the clerk of National Assembly. It is sad that people can go to that extent. I have not absolved anyone or any corporation. As far as I know, there is an ongoing investigation,” Matemu told the Star.

In the letter dated March 26 purportedly signed by Matemu, the author says the commission resolved to omit GDC from the list of organisations under investigation.

Matemu said someone is attempting to mislead the government on ongoing investigations by the EACC.

He said the true status of investigations being conducted by the EACC are contained in a status report recently submitted by the anti-graft body to the Parliament Justice and Legal Affairs Committee.

“Dear clerk, I am in receipt of your letter dated March 25 acknowledging receipt of my letter REF:EACC/DOC/KNA and the confidential doc annexed. I noted with concern that matters raised by you emanating from the committee members about sacred cows.

I have chosen to address each matter separately. This is true that we opened an inquiry for Geothermal Development Cooperation on allegations of corruption in the procurement of rigs EACC/FI/INQ/70/2014 amounting to Sh5.6 billion.

The Parliament, under House committee of PIC, also ventilated on the matter. After reviewing the attached document from Public Investment Committee, as a commission we felt that the legal framework under the loan agreement conditions and some provisions of the 2005 Public Procurement Disposal Act were applicable in the procurement of the extra drilling rig.

This guided my commission to omit GDC from your list and shared the same to State House in our detailed brief recently. Hope this will serve well to the members. Thanks,” the contentious letter reads.

Matemu says he does not know who authored the letter.

According to the Star .

I have managed to get the letter . See it down here