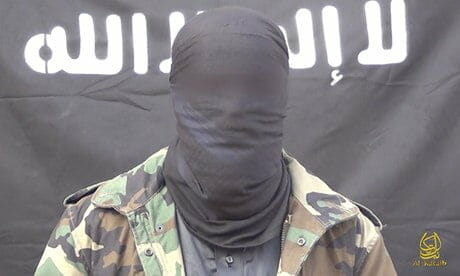 Al-Shabaab has unveiled a chilling video of its bloody rampage in Mpeketoni and Poromoko villages of Lamu County on June 16 and 17 last year that confirms survivors’ claims that white jihadists were among the mass murderers. Security analysts suggest the film is a recruitment strategy by the Al-Qaida linked group intended for Kiswahili and East African English speakers since many of the narrators speak in flawless Kiswahili with Mombasa accents although one talks in a typical British accent. It is not clear when the video was released. English sub-titles follow Arabic and Kiswahili narrations. The film is produced by Al-Shabaab’s Al Kataib media agency under the title:”Mpeketoni-Reclaiming Back Muslim lands under Kenya Occupation” and its holistic analysis suggests that violence could have been planned for years given that part of the material justifying the mass murder was an incendiary speech by slain radical Muslim leader Sheikh Aboud Rogo Mohamed who was killed in Mombasa on August 27, 2012. A narrator declares at the start of the rampage that although Rogo did not live to witness the so called liberation of Coast from Christian occupation “his words are being transformed into reality”.