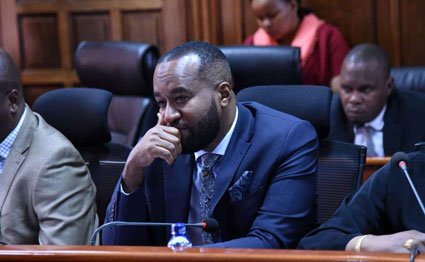 ”This is the primary reason why Hon. Ali Hassan Joho is weeping like a child before tyrant Uhuru Kenyatta: “Please save me from being extradited to stand trial in New York with the Akasha Brothers,” Joho begs Uhuru Kenyatta daily. Election thieves, drug dealers, murderers and looters must fall. #SayNoToUjinga” says miguna miguna.

The Mombasa governor and his elder brother popularly known as ”ALPHA” had earlier on been linked to a parliamentary drug report back when he joined parliament.

The accusation have been on air for a period of time with the governor continuously denying the links.

Could it be that governor is part of the reapers of the handshake?

”For Baktash, no judge, prosecutor, policeman or lawyer was unreachable. For him and his empire, everyone was fair game. Everyone had a price and the Akasha Empire, for which he served as judge, jury and executioner, had the resources to sway the conviction of almost every man or woman who found himself face to face with him.” Quotes the standard

”For tyrants and their sycophants, you’re celebrating too soon. For 25 years Agustino PINOCHET was a Chilean military autocrat backed by the USA who had helped him overthrow the popular and democratically elected President of Chile Allende in 1973. On Oct. 10, 1998, after 25 years of horrendous human rights abuses in Chile and after Pinchochet had secured “immunity” from prosecution, a Spanish magistrate, Baltasar Garzon, indicted him for human rights abuses in Chile that he had committed decades before. He was arrested in London 6 days later and detained until March 2000.

Ignorant people may think that Uhuru Kenyatta is above the law, but they must be reminded that Pinochet was 100 times more powerful, brutal and much loved by the Americans and the so-called western “allies.” He still went down in ignominy.

We are patient and we know what we are doing. So, celebrate now at your peril!” laments Miguna Miguna