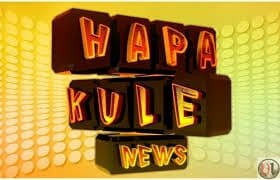 Last year mid november We had a meeting as the hapakulenews cast
Umder Protel tv and radio studios who are our producers.Since they
used to pay us peanuts of 1K per episode,they promised to add
to3k(under season 7) per ep as we awaited to for season 8 that was to
start february this year in wch we could be pocketing 5k per episode.
recently they were awarded new contract by KTN for another full
year.None of the promises were fullfiled yet they were put down in
minutes under in presence of protel C.E.O Mrs Sarah Migwi. Instead
from last year till quiting we were added an extra K that amounted to
2k per ep.We’ve been asking for meeting but they were being postponed
till season 9 was over 2weeks ago.We’ve been signing relaease forms
for the whole two years .Now in the last meeting held 2weeks ago we
requested for contracts and fulfilment of the promises and even
better negotiations.only to be told cheap allegetations of how
digital migration has affected viewership and that we were to still
work under 2k per ep for the nxt coming one year.we refused to go for
shooting because we felt they underated us so much.we still had
negotiations from our watsap group and there were 3options offerd
1.That we should be added a K ifike 3k
2.Cast reduced to half and every1 Take 4k
3.We call of the proggy

All cast went for option 3.To our suprise.we auditions were conducted
and we were replaced.After making the programme More than a million
in
one Month.Its only 8K that they can give the passionate
celebrities.So
it was better to quit cause to us its a career and such money cannot
pay bills,rent and expenses .Its now Abel mutua ,Fred Omondi and
Njugush who remained(Protel projects).They know themselves pretended
to be good but never advocated for us .Abel and freddy know where the
money goes.They betrayed us by conducting auditions.They bag hundred
thousands per month.even the new cast bado wanalipwa 3k
sai…Waliongezewa thao.And according to the actors Guild,that is not
the standard of paying cast.Jameni actors from ktn are payed 15k per
ep at the time hapakulenews is paying their actors 3K.protel is
stealing from their cast instead of nurturing them cause its
Hapakulenews that has rilly boosted the name of that greedy
production.