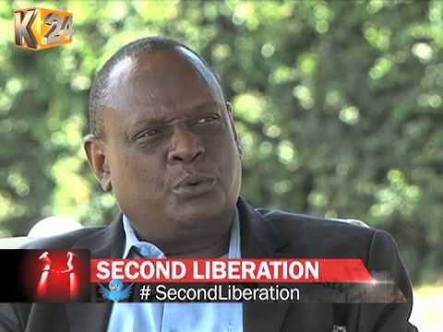 It is the season of massive casualties. We have seen many individuals condemned to irrelevance after Baba and bullshitter par-excellence Uhuru “Analytica” Kenyatta engaged in the PR activity called the handshake.

The deal was that Raila sell out his supporters for Kshs. 25 Billion, while allowing Uhuru to continue engaging in the Impunity and clusterfucker that he was accustomed to. Only this time, he has paid Baba to sanitize his crimes.

Baba after receiving his 25 Billion deducted from the Eurobond injection, then became Uhuru’s mercenary, cleansing his crimes and making an ICC war-criminal look spotless clean. Infact, Baba was at the airport to personally oversee Miguna’s deportation (for a fee ofcourse).

So we will be serializing the people condemned to irrelevance beginning today. People like Moses “Chronic Masturbator” Kuria is now left with no major task in his political life, except scratching his scrotum.

But the errand boy of Muhoho Kenyatta David Murathe is the one who has totally been swept off the face of the earth. Murathe who’s highlight in life was carrying Muhoho Kenyatta’s balls (figurative description of a cock-sucking sycophant) has disappeared for good.

Things didn’t look good for Murathe when his bosom buddy Ndegwa Muhoro was sacked as CID Director. Muhoro who oversaw the biggest corruption and wanton theft by CID officers, will be best remembered for receiving a Kshs. 5 Million bribe from Nyokabi Kamotho so as to influence the case of a land issue, together with a CID officer Godfrey Mburugu.

It is still a mystery how new CID Director Kinoti hasn’t sacked Godfrey Mburugu, the errand boy of Ndegwa Muhoro.

Moving on, Murathe has been missing in action. He was one of the hardliners spewing ethnic hate on TV, acting like he has the title-deed of kenya.

Truth is, David Murathe, Tony Gachoka, Stanley “Magnate” Kinyanjui, Ngatia Galileo, and the likes, are old retarded old men. Their brain capacity is so challenged, that even an autistic kid has more potential than those old bastards.

Murathe is an asshole and we hope that this handshake maneno will make sure that such a piece of shit never gets to air his opinions on anything in the near future.