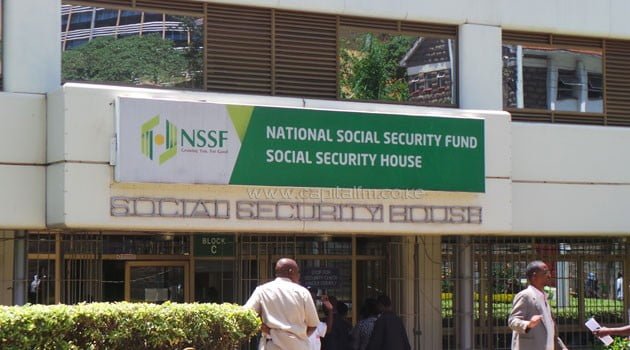 State-owned NSSF that is losing billions of shillings meant for retirees every day to fictitious shares, hiked property deals, in-house embezzlement, operational dwindled by current board chair as we highlighted here.

On top of that, a fortnight ago NSSF that is a State parastatal took the State to court on allegations that they had grabbed the funds land worth Ksh2 billion. In the classic case of the government accusing itself, NSSF states that the State has seized 13 parcels of land in Mlolongo belonging to NSSF members without due compensation.

Justice Bernard Eboso of the Environment and Land Court asked the fund that is under the Ministry of Labour and Social Protection, which is headed by acting Treasury CS Ukur Yattani if they had pushed to the limit mediation before suing the State.

“The plaintiff states that the properties aforesaid are of immense economic investment value on behalf of the workers of Kenya hence are public property whose market value is Sh2 billion and that the plaintiff and the public at large stand to suffer substantially and irreparably if the orders sought herein are not granted,” court papers filed by NSSF lawyers Lubulellah and associates read in part.

The fund lawyers and are battling the Attorney General on grounds of a Cabinet memorandum that was submitted in 2006 which stated that properties along with the planned Northern Corridor Transport terminal, running between Embakasi and Athi River, be taken over to pave way for dual carriage Mombasa road that the Americans want to construct.

But here is where things start getting messy, according to documents at the Ministry of Roads, the owners of the property were compensated in 1972. Amongst the properties, compensated include LR No. 17645, which was gazetted as a road reserve.

But NSSF is challenging the Ministry of Roads gazettement alleging that the property under registration LR No.17645, currently worth Sh300 million, wasn’t amongst those that the State had acquired.

“The plaintiff states that the 1972 gazette notices number 1887 and 1882 herein do not regard LR No 17645 and that no relationship whatsoever was established or exists as between LR No 7149 and 1504/7 which the minister of roads purports to be property acquired in 1972,” argues NSSF.
According to NSSF, the title for the same was never recalled.

Court records indicate that NSSF thereafter sold LR. NO 17645 to Oilcom Limited at Sh6.7 million on October 25, 2019. The same firm has filed a separate lawsuit challenging demolition of its petrol station on the same property.

“I am aware that there has been correspondence and meetings between the disputants herein including Cabinet secretaries, permanent secretaries, technocrats and finally an appeal to the head of civil service for arbitration,” stated Omollo.

Justice Eboso has since directed that NSSF and AG file their submissions and appear before him on December 2, 2019. The government compensated ghost NSSF representatives now they have stated haunting the crooks that feasted the funds.