Doodles provide a way for Google to connect with its users by helping them celebrate important moments and national heroes. Today, we honour Mekatilili wa Menza, the Giriama Wonder Woman who had a heart that was full of passion. Passion for freedom. Freedom against the oppressors of her people. We remember that her resistance quest led to her imprisonment in a far land in western Kenya, and that she had to walk 965 kilometres to get back to her land after escaping from the prison,” states Dorothy Ooko, Head of Communications and Public Affairs, Africa.

Mekatilili wa Menza is celebrated for inspiring the Giriama people to resist colonial rule in the early 20th century.

Due to COVID-19 restrictions, Malindi Cultural Festival, an annual celebration of local history and pride, that celebrates resilient legacy of Menza may not take place this year.

Mekatilili was born Mnyazi Menza in the Giriama village of Matsara wa Tsatsu in coastal Kenya during the mid-19th century.

She cemented her name in the Kenyan history when she organised her people against the British colonial rule at a time when women’s power was limited within her society.

At the time, the British colonial rule had threatened the sovereignty and freedom of the Giriama people with forced labour and taxation.

Here is the whole history for those of you who might have forgotten her or too young for this history class.

She is also remembered for the Mepoho’s prophecy which was about the coming of strange people who had hair like sisal fibres and moved in flying vessels as well as those moving on the water and on land.

That prophecy came true when the Imperial British East African Company (IBEA) started building the railway at the Kenyan coast. 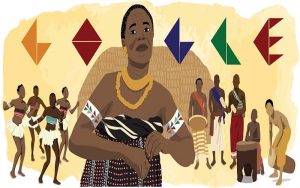 A google doodle in the honour of Mekatilili wa Menza

Google began honouring people, events, anniversaries, and holidays with Doodles designed by one of its engineers in 1999.

Since then, Google has honoured an array of African personalities such as Margaret Ogola, the award-winning author, medical doctor, and human rights advocate.