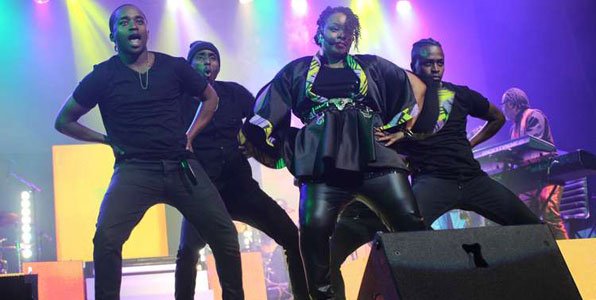 CAPTION: June Gachui at a past performance.

The ever diminishing niche of intellectual music got a boost over the weekend, after two successful gigs by June Gachui and Fena were held on Friday and Saturday respectively.

It is nice to see that there is a large uncatered for clientele of alternative/urban music with that neo-soul vybe, music which has been shunned by adolescent mainstream media street-urchins masquerading as radio hosts.

There has been this subliminal but almost concerted effort by the mainstream media to dumb-down the 8-4-4 educated mediocre citizenry, with third-rate and borderline nonsensical content, especially in the Gospel music industry.

Now we are having Gospel music being played in disco’s and pubs, because moronic assholes who work in mainstream media have conditioned Kenyans to accept that crap, played on heavy rotation, to nurture some cosmetic demand, enabling the singers bag “lucrative” shows and endorsements.

The radio hosts have then partnered with the local musicians they give unfair/undue advantage, and earn commissions from their gigs and commercial endorsements, creating one toxic cartel embedded in mediocrity.

This is what idiots like Churchill do for a living. Using their so-called “influential” status to promote mediocrity.

June Gachui had her concert last Friday at the Kenya National Theatre while Fena had her show at the Alchemist Restaurant in Westlands. Both shows were well attended, and based on social media commentary, fans seemed to get value for money as opposed to the Capital FM gig where some bunch of crackheads and ex-convicts called “Soul For Real” were booed off stage.

Moronic idiots like Nana Gecaga are now planning to bring some other retiree’s like SWV. Kenyans should boycott these shows being arranged by bullshit promoters, who seem to imagine that we love seeing these washed-up, drugged-out musicians, coming to reinvent their dead careers in Kenya.

I do believe that our country has the talent that only needs a little push from these former street-urchins, who somehow control the mainstream media. I’m talking to idiots and morons like Maina Kageni, Churchill, Eric Omondi, Jalang’o, Willy M. Tuva, and other dumb pieces of shit in the mainstream media, who’ve Tanzanianised Kenya with their love for mediocre content from Tanzania.

There has to be a deliberate effort to safeguard the future generations from the institutional mediocrity occasioned by an inferior education system, plus a clueless mainstream media. On my part, I’m happy to have played a role in highlighting the mediocrity and inherent danger posed by 8-4-4, to the point that the Ministry of Education is overhauling it.

Fuckers like Maina Kageni used their celebrity status to raise funds to buy cancer equipment, instead of pursuing transparency and accountability in the health sector. This other cushite called Abbas Gullet of Kenya Red Cross is busy guilt-tripping Kenyans into doing what their taxes should cater for. All of these clowns are functionaries of the status-quo, paid by the Jubilee Government to divert attention, allowing them to steal our money. Gullet first of all needs to tell us where he took our #Kenyans4Kenya cash.

We are glad that Kenyans on Twitter are woke to the extent that they forced 1st lady Margaret Kenyatta to abandon her bullshit marathon, because we can’t support a family which has made it it’s core-business, to steal taxpayer’s money. 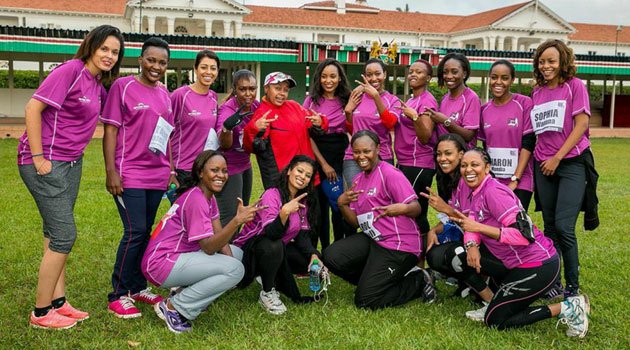 CAPTION: Some of the misguided mainstream media women who helped entrench this nonsensical marathon meant to divert attention from the Kenyatta family’s theft of health funds. Idiots!
Would you like to get published on this Popular Blog? You can now email Cyprian Nyakundi any breaking news, Exposes, story ideas, human interest articles or interesting videos on: [email protected] Videos and pictures can be sent to +254 710 280 973 on WhatsApp, Signal and Telegram.