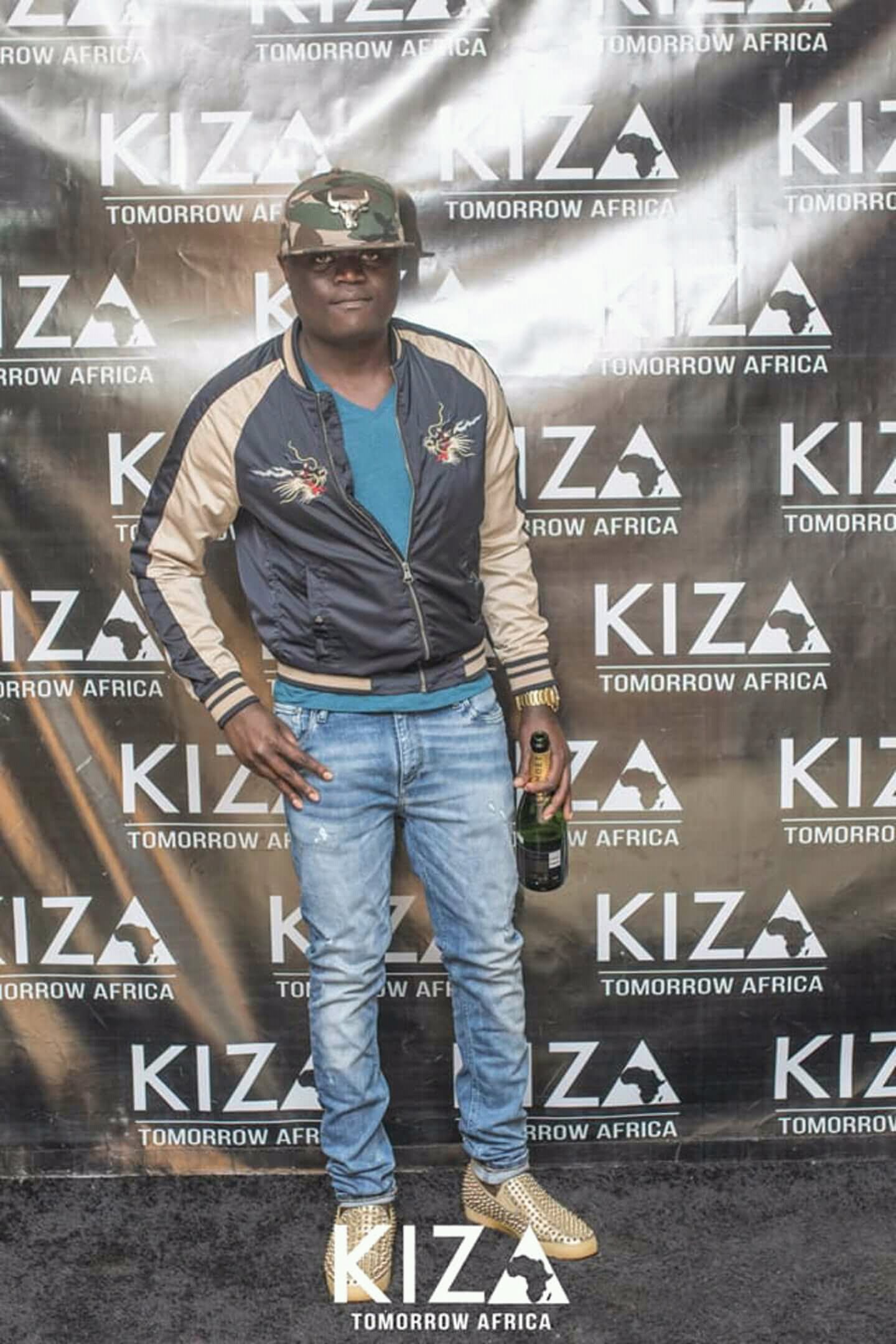 CAPTION: Gold Conman Kevin Obia was accused of assaulting a patron at Kiza Nightclub. This shadowy character should be arrested immediately.

It takes a lifetime to build your reputation but only one slip-up to ruin all that goodwill. And this seems to be the case with Kiza Nightclub.

A conman convicted of selling fake gold in Nairobi, was involved in a scuffle at Kenya’s top nightclub, after a woman turned down his advances. The flamboyant conman Kevin Obia is linked to the gold scams, where the scam unsuspecting foreigners by claiming to have a source of gold in Congo. Many of the flashy Nigerians, Congolese who reside in Nairobi, do that business.

Mr. Obia is linked to another gold Conman Jared Otieno, who was jailed sometime this year, after businessmen from Australia and Latin America filed a case calling for his arrest. He’s the guy who caused a stir in Meru when he attended a “ruracio” (traditional dowry ceremony) where he and his entourage checked in with choppers and high-end vehicles. 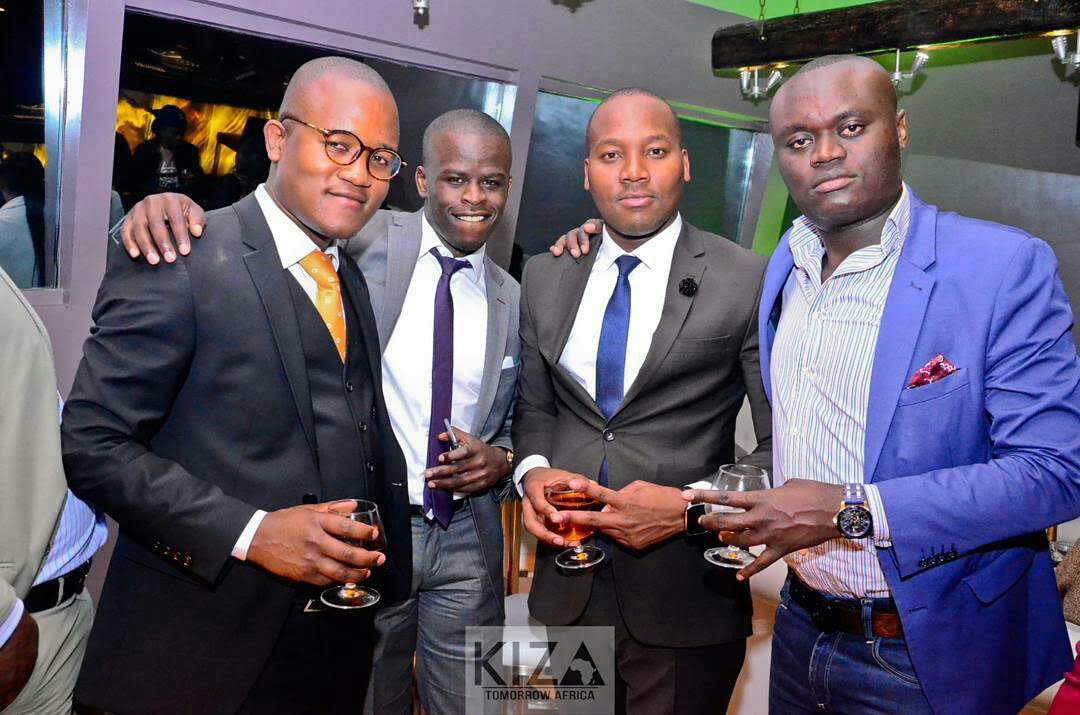 CAPTION: The “businessmen” pictured here at a past event at Kiza Nightclub. Despite the serious posturing, these are gold conmen. Jared Otieno is at the far-left while the assaulted Kevin Obia is at the far-right.

According to a patron at the high-end Kiza Nightclub located at Galana Plaza, first name Zippy, Kevin went to their table and demanded that a lady in their midst join him at around 4am. Zippy’s fiance politely told him that it wasn’t possible since she wasn’t interested, and that’s when all hell broke lose.
Obia has become accustomed to terrorising patrons at Kiza because according to clients, he shares close relations with the management. Infact this year, he threw lavish birthday celebrations at the establishment, shutting down one corner for his guests and groupies. 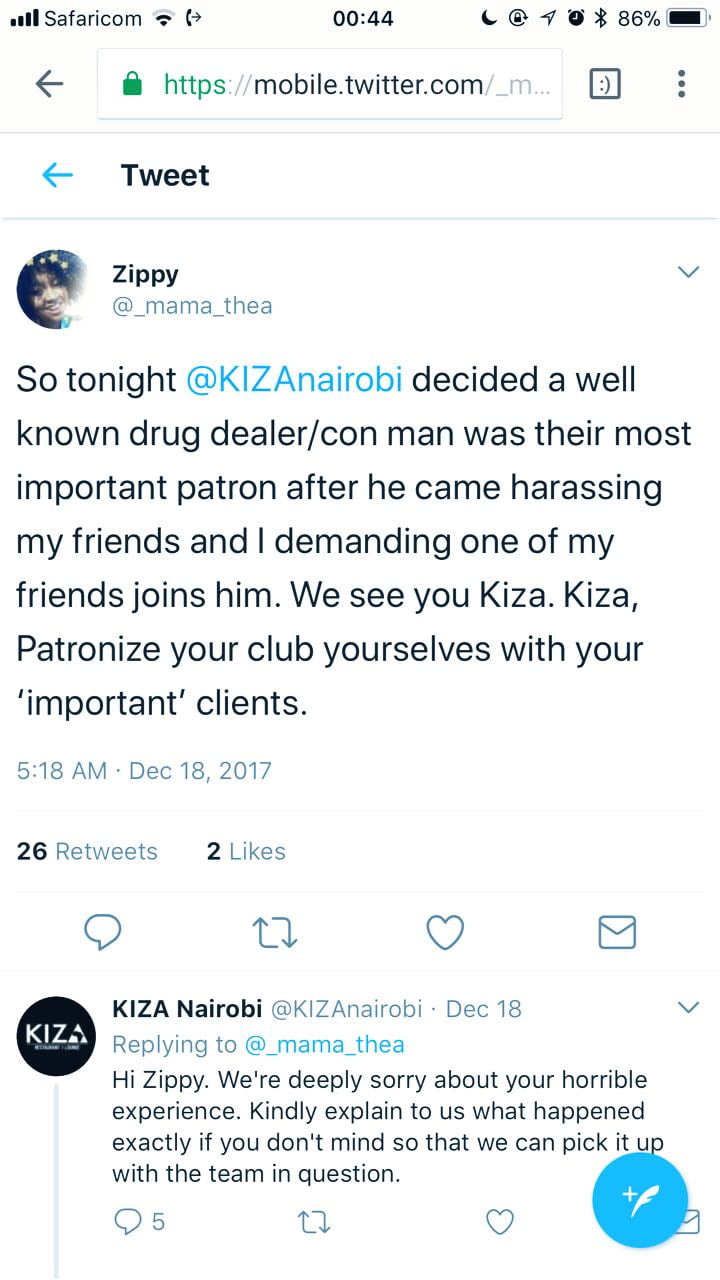 The Tweet which started off the conversation of assault at Kiza Nightclub.
Kevin Obia alias Kevin Kleigh — is a well-known crook and has made several appearances at Nairobi’s Milimani Law Courts on fraud charges. Like Mr Otieno, Mr Obia — sometimes referred to as the “Don” — is well known in Nairobi’s high-end entertainment circuit and is often described as a “flamboyant businessman” in media reports.

Mr Obia is facing charges of pretending that he could sell 7kg of gold to Mr Gallati for which he obtained the Sh13.7 million during a meeting at a hotel in Nairobi city centre. Prosecutors also allege an attempt to obtain $570,000 (Sh57 million) from Mr Gallati. This time the amount of gold the complainant was promised weighed 13kg.

Mr Gallati had reported the case to Nairobi’s Central Police Station on May 18, 2015 and has been flying in and out of the country to attend court sessions alongside a witness.

According to Zippy, the bouncers at the popular nightspot were acting disinterested, probably because they earn mega-tips from the conman. She particularly took issue with the hotel’s contempt towards “ordinary” clientele, while seemingly breaking their backs for such shadowy characters. 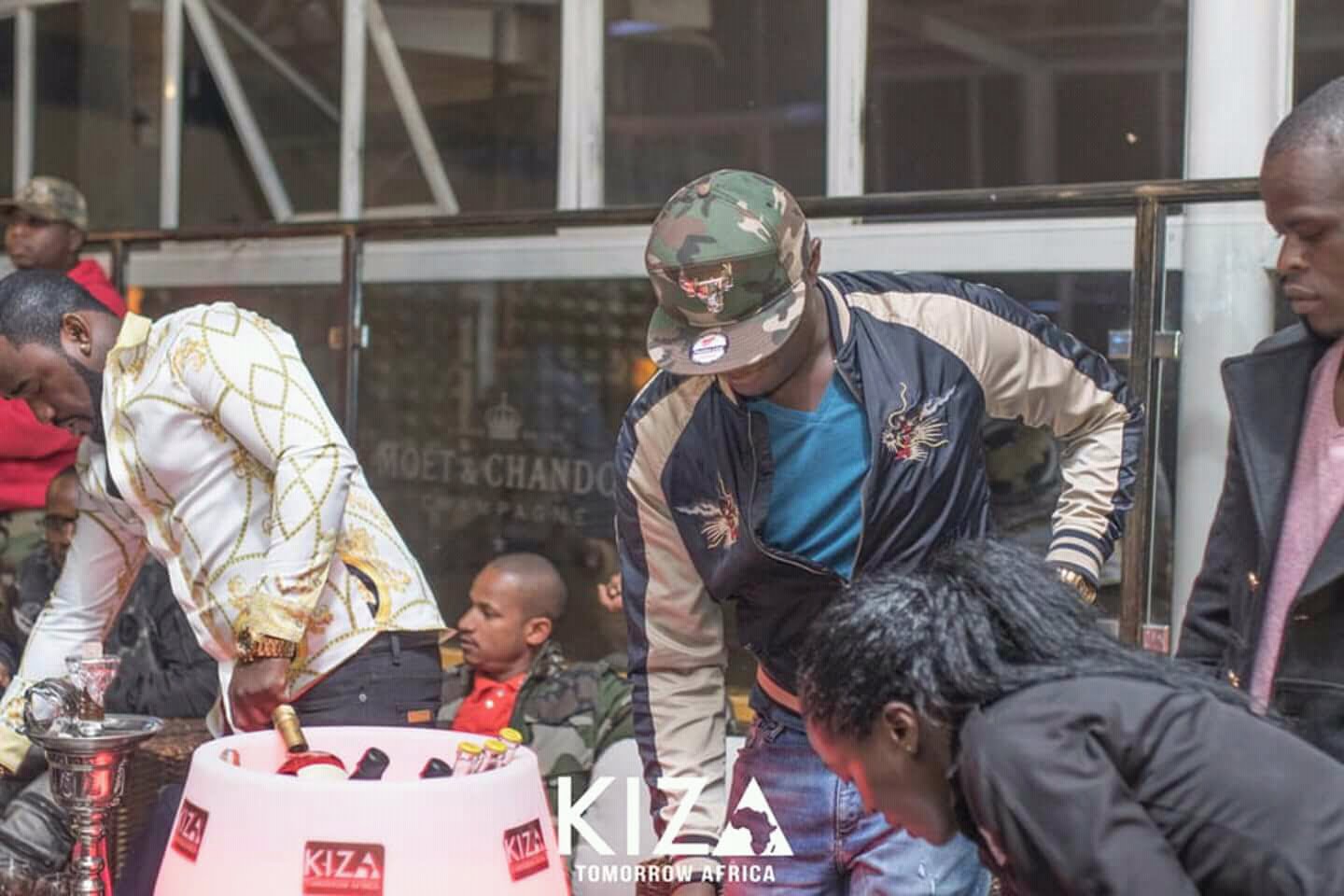 CAPTION: Kevin Obia during his birthday. In the background, you can see Embakasi East MP Babu Owino who is also involved in the same business. Others include Steve Mbogo, Mike Sonko, Paul Kobia, Joe Kirimi and Sofapaka Club owner Elly Kalekwa.
Kevin Obia typifies the Nairobian culture, especially common with Luo men, who blow all their cash in nightclubs and leave nothing to invest. Their rural homes have mud-huts. Jared once spent Kshs. 1million in a Nairobi club, money that he could have used to invest or give back to the community through charitable events. Instead it was spent pouring Moet.

Kevin Obia must have been shocked to discover that not all women are Nairobi Slay-Queen “Malaya’s” who sing to his tune, just because he has money. Today we attached a Slay-Queen “Wall Of Shame” showing women whose work is to show ass on Instagram, targeting rich men and using their booties as bait. Obia must have thought that he was dealing with one of those.

In the past couple of weeks, we have launched the Boy-Child campaign, highlighting the scourge of Slay-Queens in this country. Despite being vigorously defended by a section of the media led by Maina Kageni and Churchill, these disgusting creatures are nothing but a liability to the economy. Despite them earning income, nobody knows where their money goes because they’re always begging men for cash. Many just buy shoes. Pair after pair, pretending to be Imelda Marcos-wannabe’s.
This week’s list includes Sarah Teshna, Amber Ray, Jane Kanyi, Sharon K Mwangi, Michele Ntalami, Neomi Nganga, Wanjiku Kirika, Georgyann Devyn, Nancie Mwai, Sheila Kwambox, Killy Kabybe, Francene Chettle, Terry Maina and DJ Malaika. 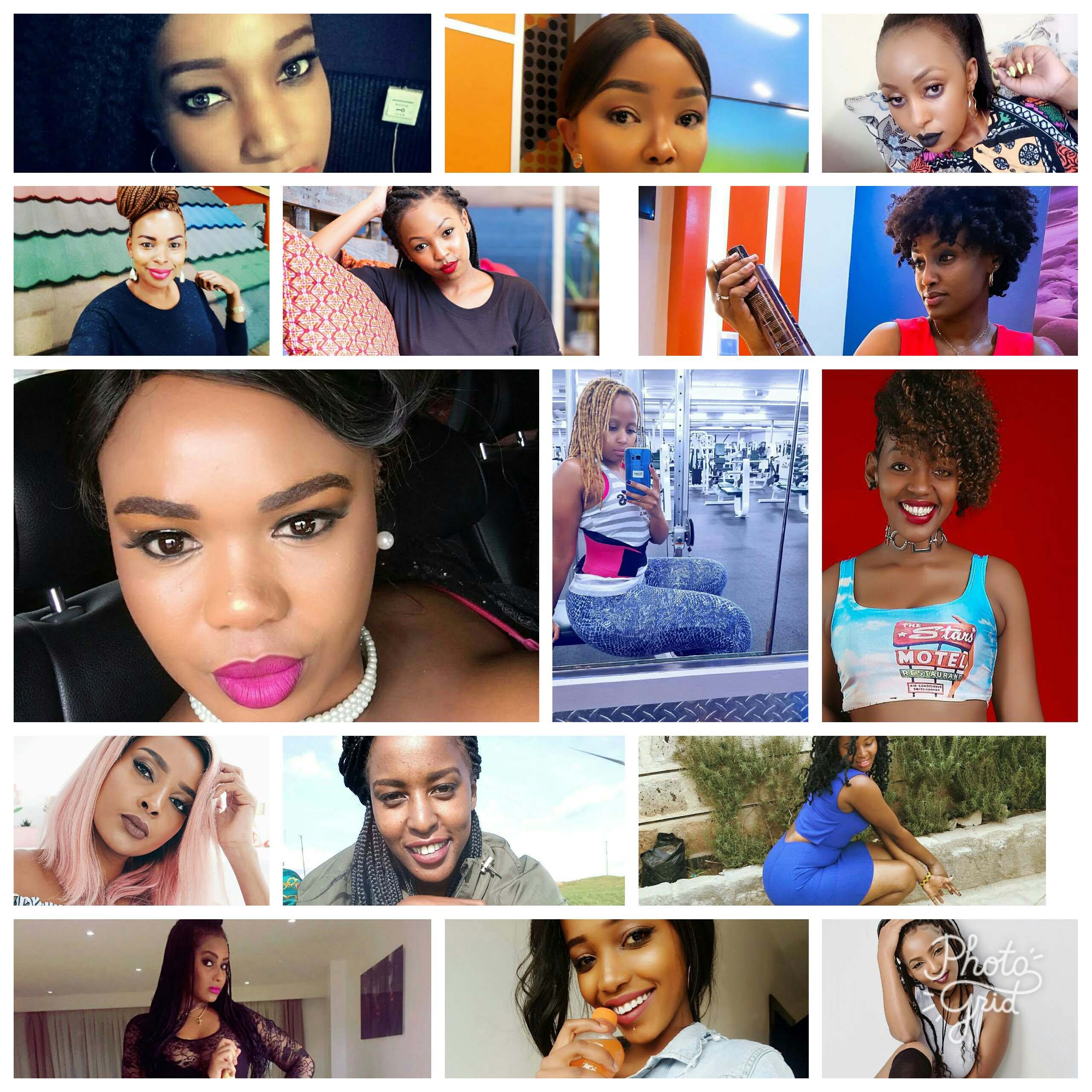 CAPTION: The Slay-Queens “Wall Of Shame” which will be updated every week, is a list of bitches who flaunt their bodies on Instagram, hoping to bait monied men. Main criteria of choosing them was their refusal to show off their husbands or boyfriends on social-media. Obia must’ve thought he was dealing with one.
We’ve attached some of the tweets in the conversation from Zippy’s complaint, and surprisingly the management of the hotel didn’t offer a comprehensive apology whatsoever. Just those template responses which any PR operative can draft.
If it was a serious establishment and after verifying that the incident did indeed take place from CCTV footage, they’d have offered the same patrons free dinner and a bottle of Hennesy to the victims, plus proof that they’ve sacked the said bouncers who treated the issue so casually. Clearly Kiza is not ready to do so. Words alone don’t mean anything. Previous complaints about such incidences have landed on deaf ears and clearly there seems to be no difference with this. 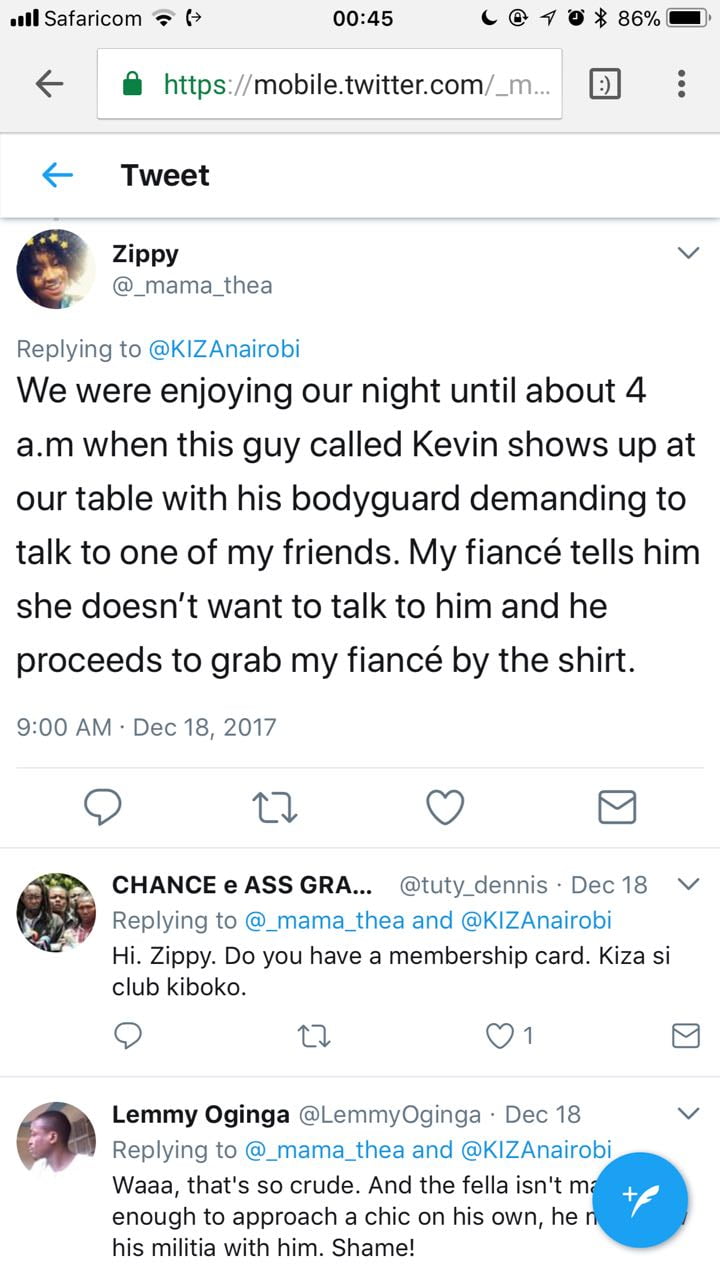 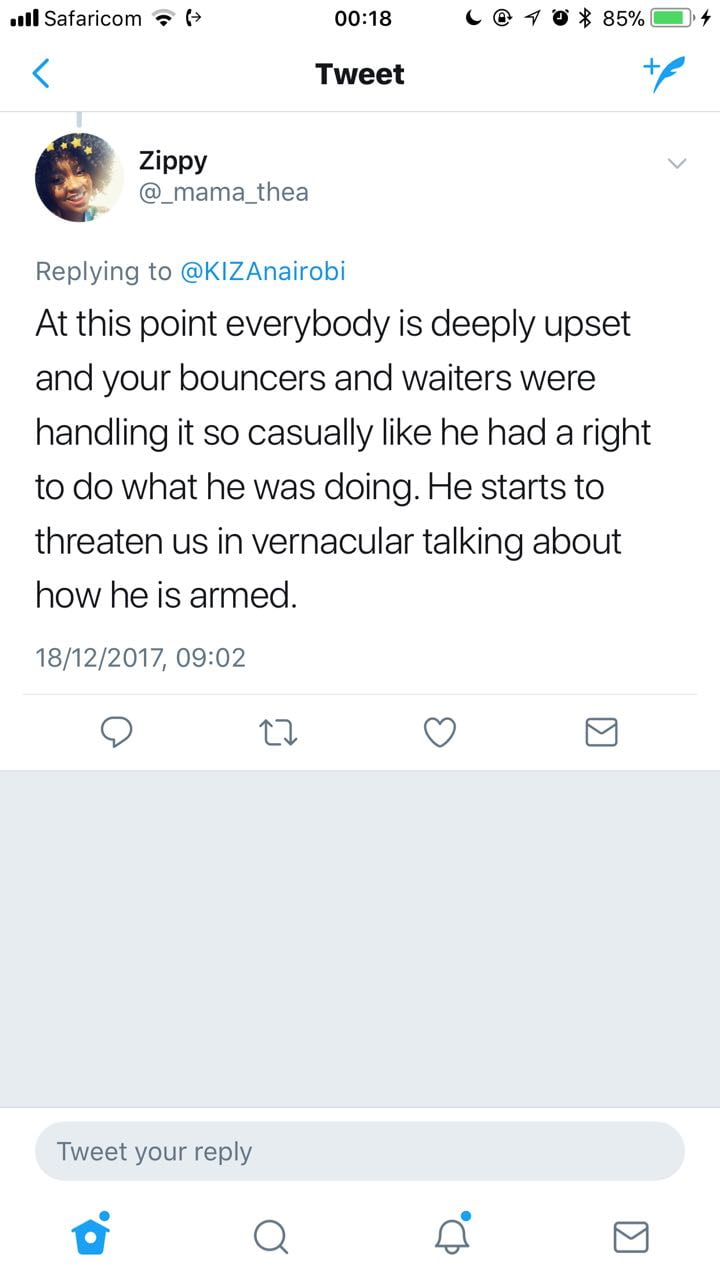 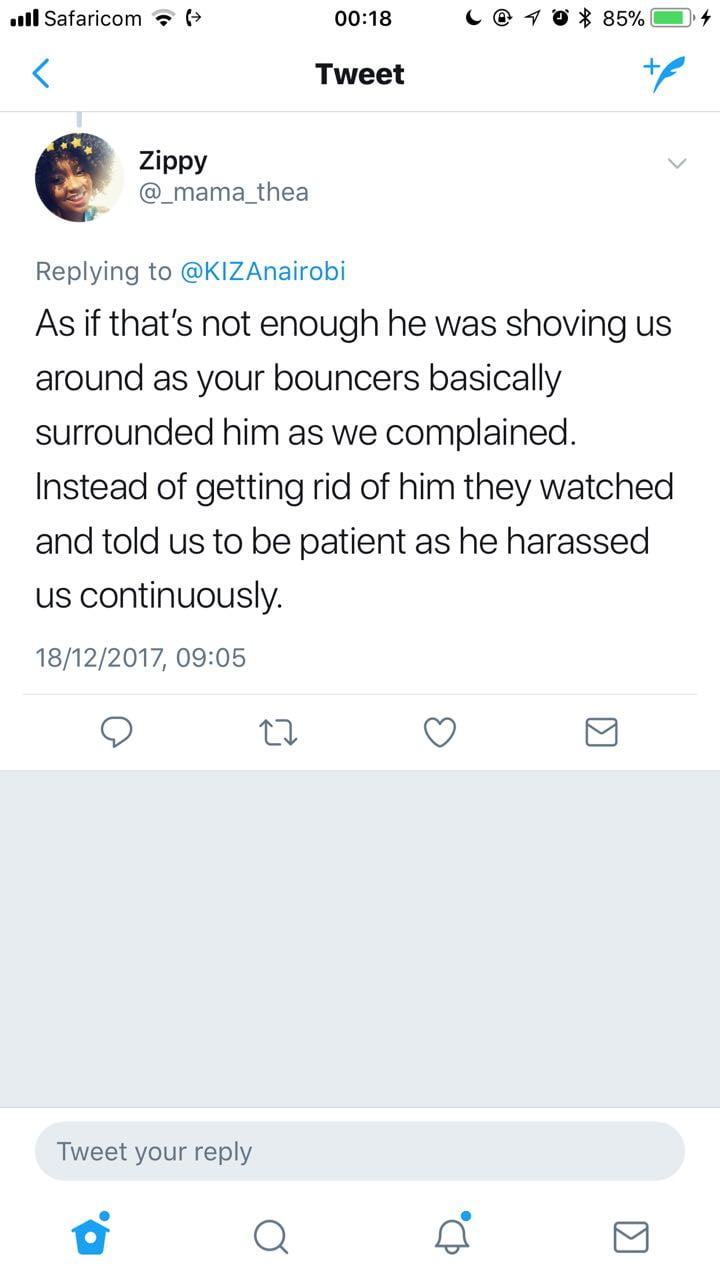 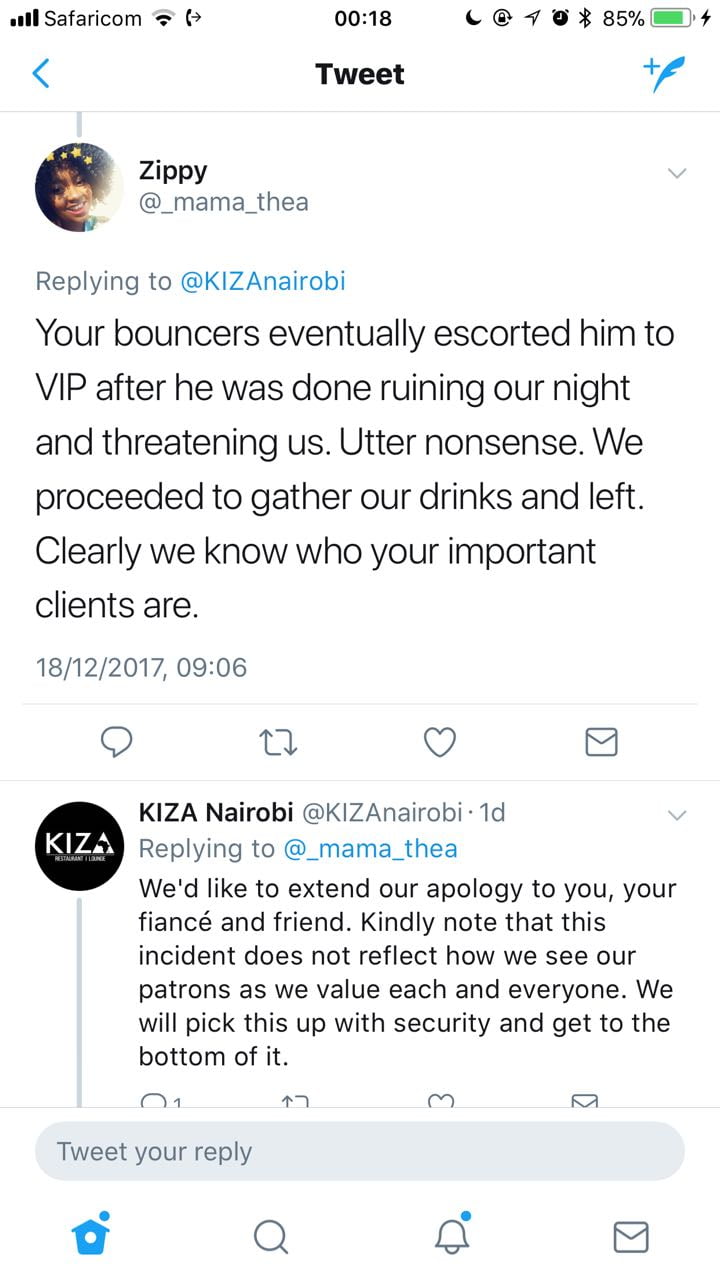