Meru University got a new Vice-Chancellor, Professor Charity Gichuki, after the exit of strongman “Professor” Japheth Magambo- In quotes because I doubt a professor would lead a university the way he led the great institution. Professors must behave like good teachers that listen to their learners. Learning is an interactive process and so its management of any institution.

Despite saying he’d rather die than resign, the parasitology “professor” Magambo, surrendered after a report that was handed to CS education Amina Mohammed by IPOA linked the University management to the elimination of Student leader Evans Kidero. Intelligence on the ground by government machinery indicated that his continued stay at the institution would lead to more trouble. Magambo had to ext like a rejected dog.

But one man remained mute, as all this happened: Professor Gitonga Mburugu, Professor Magambo’s Spanner boy. Those that have faced Gitonga Mburugu’s ruthlessness will tell you the man behaves like a Moi Era police operative.

Gitonga Mburugu is the man behind all the Kangaroo disciplinary committees where students are expelled even for stepping on a spoon. He doesn’t understand anything pertaining dialogue, negotiating with students or engaging students who are the biggest stakeholders in any institution. Usually, Professor Magambo would call Gitonga to accomplish any evil deed he wanted.

It will be a total waste of time for Meru University students to resume with Gitonga as DVC. How will he even work with the new VC or students with his dirty, non-engaging and military-camp-like traits? 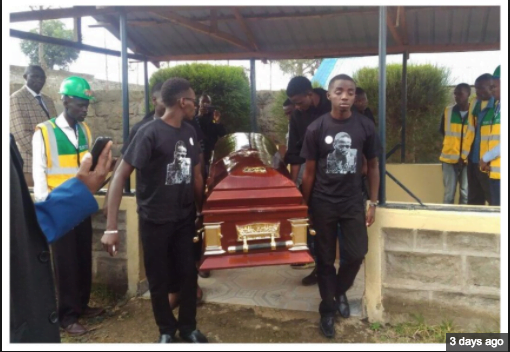 Caption: Funeral of late Meru University Student leader Evans Njoroge. Police reports have linked management to the planning and execution of the elimination.

To fix many things at Meru University, a radical surgery is needed and all the top management Must Quit for people with new and fresh ideas to take over. And this is why I’ll never praise Amina Mohammed because there is a lot to do.

Sources from within the university indicate that Gitonga Mburugu has vowed to deal with students that were loud, during the struggle. He is a dangerous man who has a habit of influencing even students marks. A story is told when Gitonga ordered the examinations department to intentionally fail a student leader that was very tough on the school administration.

It will be a mockery of a century for Gitonga Mburugu to remain at the helm of Meru University. The students know very well that management, led by Magambo and Mburugu organized for the elimination of Evans Njoroge because he was tough on them. The trigger-happy criminal that killed the student leader is yet to be arrested.

Gitonga Mburugu should resign willingly. Comrades should not always go to the streets to demand a criminal’s resignation. Sometimes the criminals should know who they are and make our work easier.