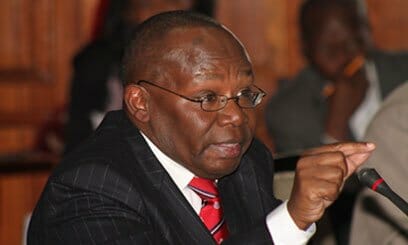 Attorney General Githu Muigai has been sucked into a land dispute revolving around two feuding factions in Kiambu county.
This is after a state counsel at the AG Chambers, Doris Githua, on Thursday last week presided over a controversial annual general meeting-cum-election of new directors of Githunguri Constituency Ranching Company in Ruiru, Kiambu county where the polls were swiftly dismissed by the rival group.
The group led by John Maina Mburu held the elections at Matopeni Primary School grounds in Ruiru where Mburu was re-elected chairman with Peter Mwangi, Grace Muthoni, Esther Waithera and George Waweru picked as directors. The election was supervised by Doris Githua from the Attorney General’s office.
But the AGM drew swift criticisms from the rival group led by Ahmed Gikera, who termed the new directors as imposters who they kicked out of office mid this year.
Gikera claimed that the former board of directors led by Mburu was on May 23 2015 voted out of office by the members during a special general meeting. He said other directors voted out together with Mburu are John Mwangi, Esther Kinyanjui, Henry Kihoro, Peter Muturi, Grace Muchai and John Wanjohi.
Gikera added that during their AGM, they elected Stanley Njoroge, Joseph Muthoni, Teresiah Mathai, Monica Chege, John Waweru and Henry Wainaina as directors with him as the chairman.
He faulted the faction for holding the election yet there was a pending suit at a Thika court whose judgment will be delivered on January 22 2016.
Gikera said the wrangles at the land buying company saw the court on November 10 2014 order the directors to hold an election within 90 days but this never materialised due to lack of a register and other vital documents.
He adds that on February 14 2014, the members held an extraordinary meeting where they formed a caretaker committee to fill the void in public members’ office and hold elections.
But later, one of the members Joseph Kinuthia, took the caretaker committee to court for failure to call elections. The court ordered the caretaker committee to call elections within 30 days.
Gikera opined that his team was elected on March 23 2015 as per the court ruling delivered on November 6 2014 by Justice JM Mutungi.
But their rivals, he added, moved to a Thika court and got enjoined in the case filed by Kamunya where they were issued with two orders that they did not serve the rivals.
It is after this that Gikera filed for a judicial review application at the High Court to quash the proceedings at Thika court issued on July 28 2015. The judgment will be delivered on January 10 2016.
Gikera team had also applied for a Certified Public Secretary for CR12 but a state counsel at the office of the Attorney General, Coretta Maweu, while acknowledging receipt of their returns declined to issue CR12 pegging her argument on the two orders emanating from the Thika court.
But the Gikera team wrote to the AG stating that the company’s offices were on September 14 2009 broken into and vital documents disappeared and none had been reconstructed. This was during the tenure of their rivals.
But at the height of the dispute at Githunguri Constituency Ranching Company Limited is the putting up of a Sh4.5 billion sewerage project for Ruiru town in the disputed land.
Early this year, the Gikera faction moved to court demanding compensation for the plot measuring 82 acres which had been identified to host the sewerage treatment plant.
Through their lawyer, they sought orders to stop the World Bank-funded sewerage project until they were compensated. The petition was signed by Peter Njoroge and Teresiah Mathai on behalf of the shareholders. The Athi Water Services Board and Sino Hydro Corporation – the contractor – were listed as defendants.
The applicants argued that the World Bank has set aside Sh2.5 billion for their compensation and Sh2 billion for putting up the plant. They demanded that they be given the money before the project kicked off.
The project is meant to benefit the sprawling Ruiru and Juja townships once completed.
Others who signed the petition were John Waweru, Joseph Kamau, Joseph Muthoni, Ahmed Chege, Family Shade Limited and Land Luck Investments.
They claimed they are genuine members of the land buying company and are therefore entitled to consultation and proper compensation before the project is launched.
The applicants further in the application wanted the World Bank, Githunguri Constituency Ranching Company Ltd, Athi Water Services Board, Kiambu county government and Ruiru Sewerage Works declared guilty of trespass and illegal acquisition of their land.