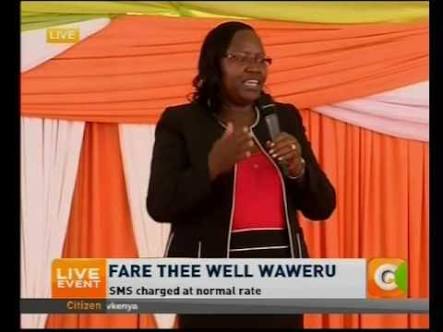 CAPTION: Rose Wanjohi is the HR Director at Royal Media Services whose narcissism has seen her mistreat any department with many men. She’s a lunatic.

The above subject refers.

We are aware of the company’s plans underway for major changes in news production. We have also observed the company’s efforts to involve and prepare staff for the upcoming changes through departmental retreats.

While we are in full support of the changes, we however, as always, feel sidelined. It is rather unfortunate that we have not been considered for the ongoing Mombasa retreats. Though our exclusion in key events has been the norm, we felt the need to bring this particular one to your attention since it is happening under your mandate.

Studio Technical Operators are an integral part in on-air execution of news productions. It is for this matter that we view the constant sidelining of our department in matters production as a deliberate attempt to shortchange us.
We beg your indulgence on this matter before the start of the rehearsals next week. We have representatives on standby for a meeting with you upon confirmation for an appointment on Monday. Our key issues include:

Inclusivity. I am a staff at Royal Media Services and I work as Studio Technical Operator, commonly referred to as STOs and I am under TECHNICAL DEPARTMENT.

So we have been having an issue for quite some time concerning our salaries. The management has not been paying us well and whenever we raise the issue they promise to look into the matter or sometimes blatantly telling us the company has no money yet in the recent past we have seen them hire some of the best renowned news anchors and they are paying them huge salaries.

To make matters worse, some cleaners and drivers earn even much better than some of us yet we are well trained in this job.

Another issue is that whenever they have retreats or workshops outside Nairobi, they always leave us behind a factor that is so demoralizing.

The company is planning to relaunch on 22nd of this month where they will unveil the new team of anchors but we want then to look into our issue before the relaunch or else we will cripple the operations on that day.

We feel that’s the only way they will realise our importance to them.

So we wanted you to publish this then when it goes viral they will seek audience with us before things go south.

I beg to remain anonymous for the sake of avoiding victimisation. But for further clarification feel free to contact me.

To add to that we did seek audience with our new boss Fred Afune who is the Director of Radio and Technical Services two months ago and he promised to look into our issue but up to now no concrete feedback is forthcoming so we feel after relaunch they will not address our issue.

Again in our department the company promoted one of us to supervisory role after they restructured two years ago but unfortunately up to this day the management has not confirmed him so he is just a caretaker and as a matter of fact he even earns less than some of the STOs yet he is our Supervisor. Most of us are planning to resign in protest of huge pay (four times) offered by Royal Media Services to new recruits headhunted from other media houses. Most of us have been part of the growth of TV yet our salaries have remained stagnant for seven years.

Last week some journalists went to a retreat to Lukenya recently where the human resources manager arrogantly told them off asking for pay increase. Telling them don’t talk or expect increment. They were pissed off when the Human Resource manager told them that if they are seeking more money to motivate them to work then are in the wrong profession. Some departments were not represented like STOs.

Royal Media Services has not increased pay for it’s employees over the past seven years yet it has been dishing out fat salaries to new recruits being poached from other media houses. Our salary was deducted without being consulted to pay for our medical insurance. The HR has brought her sister to be in charge of our welfare (company nurse )