Gertrude children Hospital has for the byyer part of today been the center of discussion by a section of Kenyans on Twitter (KoT).

A tweep, Gathoni Chimandem (@QueenGathoni) shared a receipt of the hospital bill of nearly Sh200K for treating a wound on a kids leg.

This is not the first time such an exorbitant bill has bee shared online inviting the ire of Kenyans.

The case of Matilda Anyango, a tailor, was also discussed online. She did not survive the knife attack, she bled to death while undergoing emergency treatment at the hospital. But to add salt to injury, the hospital detained Matilda’s body with a mortuary bill of Sh2000 per day piling.

In January 2020, Nairobi Women’s Hospital was put on the spotlight after the CEO Dr Felix Wanjala was exposed for running the hospital like a stock market.

The problem is Private Equity Firms that have infiltrated these hospitals. The sole goal of PE firms if to make profits.

The hospital was accused of defrauding patients through unnecessary tests and admissions to raise revenue. Discharge of patients was being deliberately delayed so as to create more avenue to ask for money from them.

An investigative report, led several insurance companies and the Kenya Revenue Authority (KRA) to suspend the hospital from the list of the authorised medical services providers. 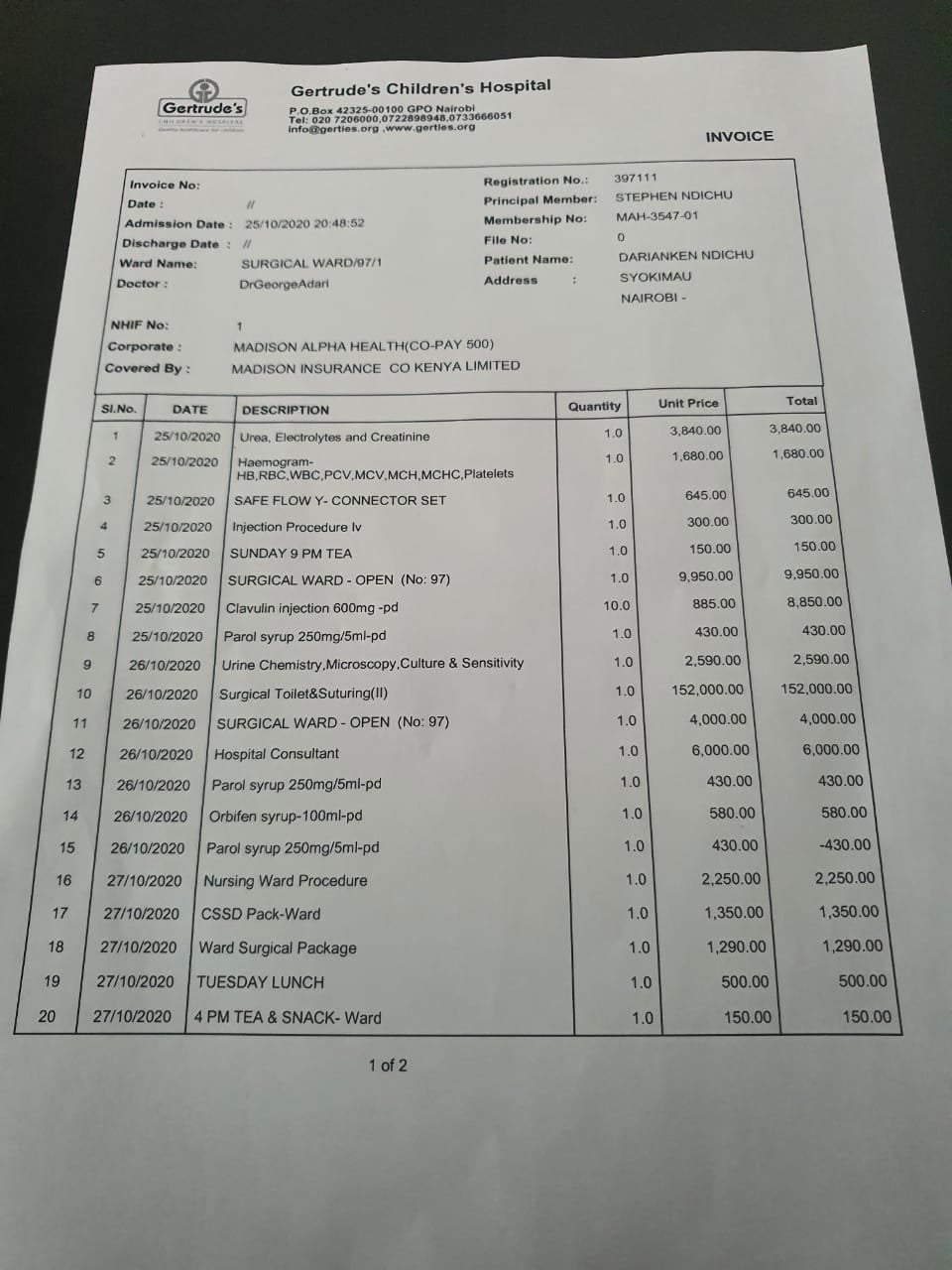 Nairobi Women’s Hospital denied the allegations but the truth in screenshotted chats was all there to see. The Hospital’s CEO resigned.

The Rot In Kenyan Hospitals

Early this year, the Insurance Association of Kenya (AKI) announced that it will review the pricing of hospital bills for all hospitals after cases of fraud were reported.

“The rot must be beyond just one hospital. We are having a meeting tomorrow with a view to addressing the bigger issue. We know most of the things Nairobi Women’s has been accused of are happening in many other hospitals,” AKI chief executive Tom Gichuhi said in an interview in February 2020. 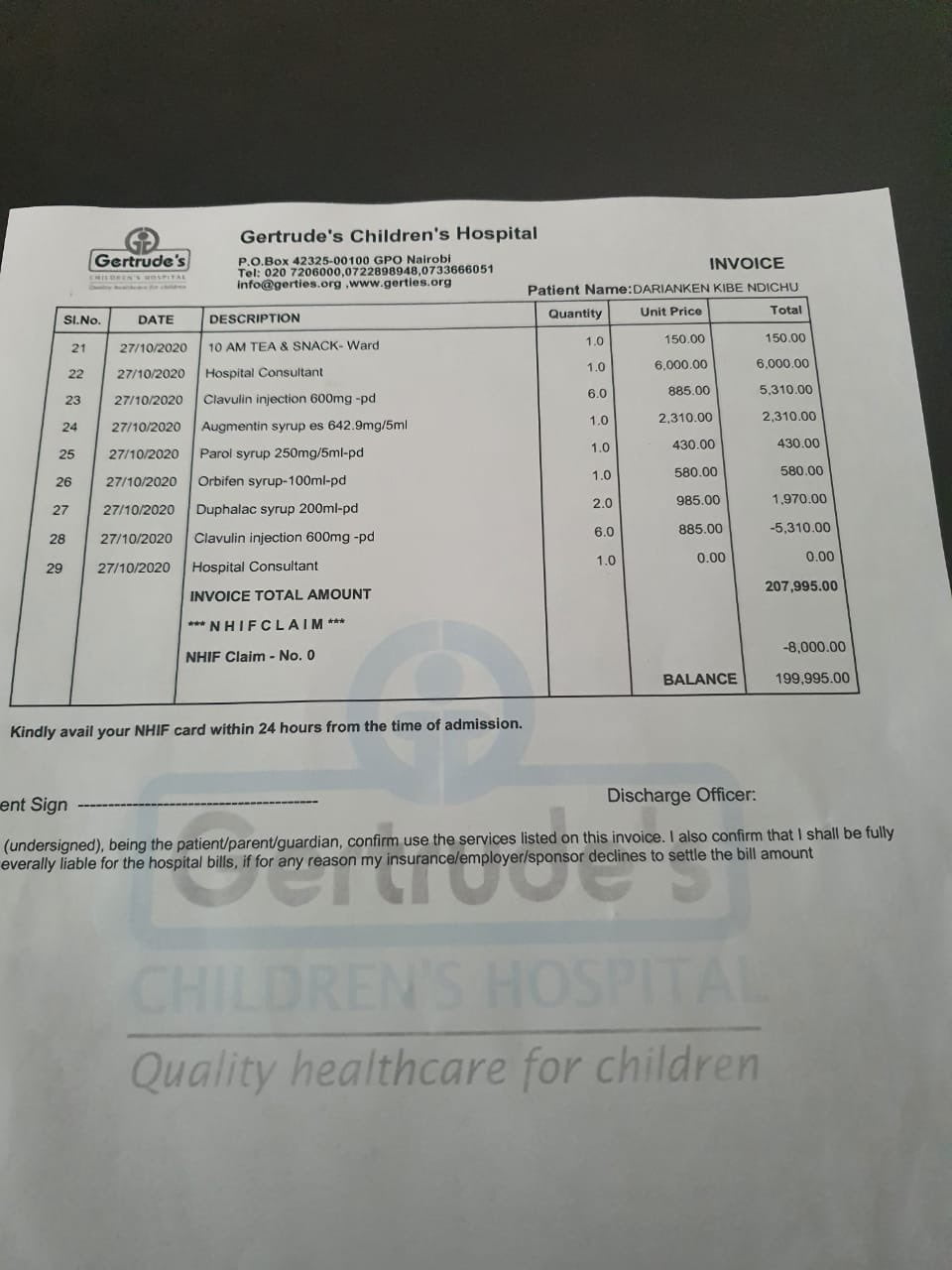 Mr Gichuhi said all medical insurers and underwriters are now willing to take punitive measures against hospitals inflating costs or engaging in fraud.

“We want to come up with a broader strategic direction on how we engage service providers going forward. If we find those who can’t reform, we will not fall short of taking the punitive action of blacklisting them.”

However, many months later, the review has gone cold.

Here are views about Gertrude Hospital from KoT.

Yaani, for a leg wound they performed a blood count test, a mild cancer test, gave you meds used for constipation, another for a liver disease and 3 different types of mild pain meds?

This is theft, this is outrageous. https://t.co/r1BTmbApIn

My brother was just discharged from hospital last week and when they gave us the bill I insisted on an itemised bill & questioned EVERY single entry. They ended up reducing that bill by ksh 230,000 because they couldn't explain some charges & I made it clear I had time.

152k for surgical toilet? Why did this kid require kidney function test in the first place? This is outright robbery! Wizi! https://t.co/x5Rv0Vpa6e

In a Democratic country #parliament and @MOH_Kenya would do inquiries with the ultimate goal of jailing people. But they all United against the citizens! https://t.co/ZkIaTfXMPl

The problem is Private Equity (PE) firms that have infiltrated these hospitals.

The sole goal of PE firms if to make profits.

In this article:Gertrude's Children's Hospital