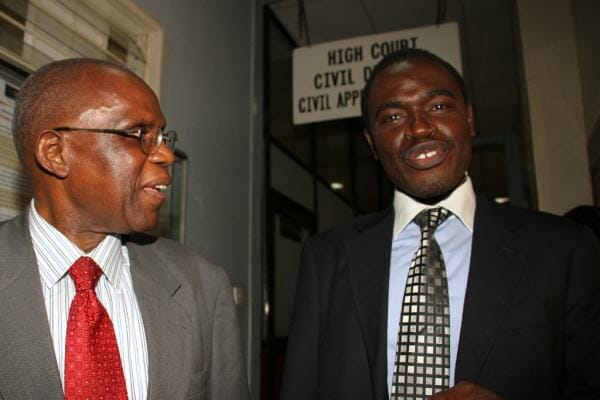 The respected late former cabinet minister Jeremiah Nyaga must be spinning in his grave in awe given the alleged misconduct, financial impropriety and sexual shenanigans of his three sons as the Nyagah boys are said to prosper on association and name-dropping to have things fixed in their favour.
Joe Nyaga is the eldest of the Nyaga sons and himself a former cabinet minister born in 1948. He was followed by Norman Nyaga, an MP in two diverse constituencies in his political career, born in 1950, and then there is Nahashon Nyaga, the former Central Bank Governor who left in disgrace and born in 1952.
Joe was the minister for Cooperative Development and Marketing in the Grand Coalition government. Three years after leaving office, his LinkedIn profile still refers to him as “Cabinet Member at Government of Kenya”. This, sources claim, is the typical Nyaga association con at work, notice the ministry is not identified and he is described as “at”, not “in”. Spanish, Italian and Greek prospective business partners would be unlikely to notice this fraudulence and to assume that he is still at the centre of things, it is feared.
Kenyans will remember that Joe is one man who allegedly grafted himself onto a married woman living with her husband and found it normal. Norman once got his hand broken by thugs in Ngong Forest for allegedly stealing a happy moment with a married woman of Asian descent.
Nahashon was at Central Bank when Euro Bank crashed and its depositors lost Sh1.4 billion. The National Social Security Fund lost Sh256 million, Kenyatta National Hospital lost Sh421m and the National Hospital Insurance Fund Sh479m.
A dozen years later, Nahashon’s name has hit the news headlines after the man stumbled onto Kenya’s biggest real estate development ever, Tatu City, which describes itself as, “A 2,500-acre, mixed-use and mixed-income development with plans for residential, commercial, industrial, tourism, social and recreation amenities for more than 70,000 residents and 30,000 day visitors”.
Rendeavour, Africa’s largest urban developer, is the majority shareholder in Tatu City, having invested over $100 million in the project.
In addition to Tatu City, Rendeavour is building satellite cities on over 30,000 acres of land in Ghana, Nigeria, Zambia and Democratic Republic of Congo.
Rendeavour’s principal shareholders are Stephen Jennings (New Zealand) and Frank Mosier (United States). Jennings and Mosier have invested and lived in emerging markets for over 25 years.
Into the middle of this truly 21st century development stumbled on three musketeers, Kenyans – Nahashon Nyaga and Stephen Mwagiru hold minority shares in the Tatu City project via a Mauritian company, Manhattan Coffee Investment Limited. The three blind mice Mwagiru and Nyagah are embroiled in a shareholder dispute in a Mauritius court. In May 2015, Nyaga lost two court cases (with no right to appeal) and his shareholding in Tatu City Limited became diluted to less than 1.8pc.
Nahashon, those who know him allege, exemplifies the Nyaga brothers’ kiria kioneku nikirio (loot on sight and first opportunity) a philosophy of thievery that was described by crooner Joseph Kamaru in a Kikuyu pop song as Watho wa Hiti wa Mugwanja (the Hyena’s Seventh Commandment).
The three devotees of the Hyena’s Seventh Commandment, Nyaga and Mwagiru have watched with gaping mouths and rumbling bellies as Tatu City’s construction has gone full speed ahead without a penny of financing from them, it is claimed. And so, they have allegedly resorted to a combination of extortion, vexatious legal actions (which they always lose), bribery of members of the Kenyan Judiciary (for instance freezing Tatu City’s bank accounts, blocking the removal of Nyaga as chairman of the Tatu City board and preventing the Tatu City board from holding meetings to discuss crucial commercial issues).
Corrupted police and immigration officials were set on the expatriate investors by the hyena-ish trio to block them entry and harass them out of all proportion, it is further claimed.
And then, Nahashon went berserk, allegedly facilitating the unlawful transfer of US$100 million in landholding assets from Tatu City to his family, including a brother, sister-in-law and staff.

Nahashon Nyagah is now being accused of bribing Ndegewa Muhoro to protect him in the Tatu City controversy claims that have put the disgraced DCI Boss in the spotlight .