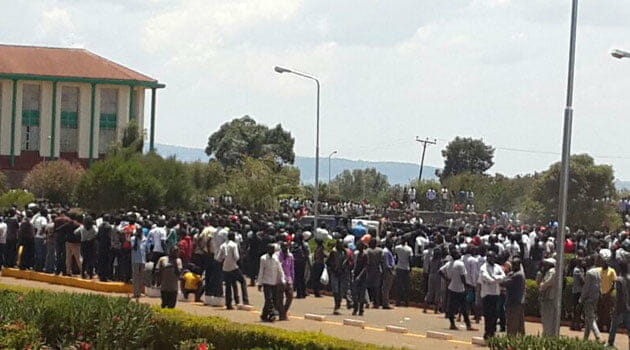 A fresh riot has broken out at Moi University, a day after students burnt a police vehicle while protesting against the rape and killing of third year student.

The students have blocked roads around the university after destroying property in the campus, vowing not to resume classes until proper security measures are put in place.
“Our union officials had a meeting with the administration this morning and it seems there was no agreement,” a student told Capital FM News. ”

That is why chaos started immediately after the talks failed.”

They are accusing the university management of not taking the matter seriously by not stating what measures will be taken to safeguard them in and around the campus.

In a statement appearing in local dailies on Monday, the university’s Vice Chancellor Professor Richard Mibey urged the students to remain calm and allow police investigate the murder.

Police have so far arrested two suspects who are being interrogated over the rape and murder of the third year student who was pursuing a Bachelor’s Degree in Education.