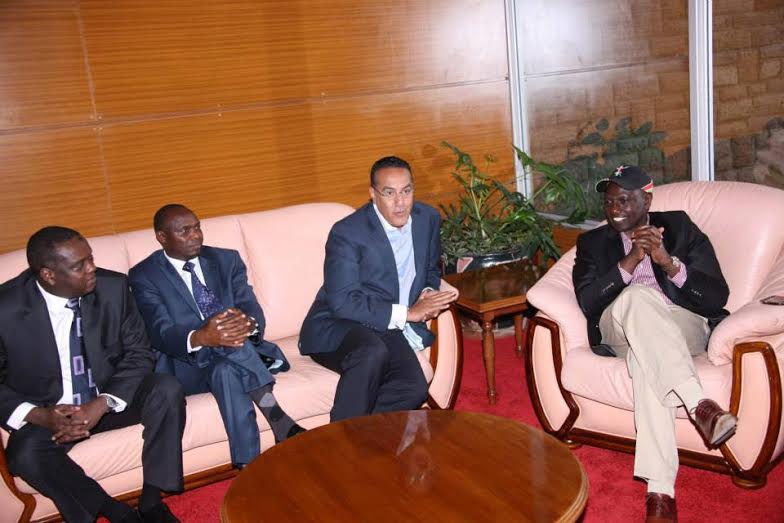 Photo Caption: Sports CS Hassan Wario, from Ruto’s URP side of the Jubilee coalition. Wario is on the spot over the seemingly industrial-scale corruption in his ministry which has made no meaningful achievement yet.
Cabinet Secretary in the Ministry of Sports, Culture and Arts Hassan Wario is now on the spot, after the the Office of the Auditor General (OAG) revealed that his ministry holds the highest outstanding imprests for the year 2013-2014.
The revelations coincide with an expose that this website has been releasing, as regards to a deficient agreement signed by a parastatal with the Ministry, formerly Sports Stadia Management Board and now reconstituted as Sport Kenya.
During the same financial year, Sports Kenya signed a contract with OpenSide Sports without due process or involvement of the board, and paid a down payment of USD 500,000.00 to a shadowy company to arrange a tournament known as Magic Cup, in full knowledge that the firm was not licensed by World Governing Body FIFA, and had no experience in executing a project of that magnitude.
Imprest definition as regards Government, Politics & Diplomacy: An advance from government funds for the performance of some public business or service.
According the OAG, the Ministry of Sports, Culture and the Arts holds shs. 69.9 million in outstanding imprests over 2013/14 financial accounting period. That is close to 39% of all outstanding advances by Government.
Question: what were those advances for?
This amount is higher than that of the Foreign Affairs as well as Energy & Petroleum dockets. Both these ministries can “quantify” these advances. One needs only to look at what they have both achieved in that period.
Consider the numerous energy/oil agreements and projects ongoing that are putting the country on the global map. Kenya is for example now the top African and eighth in the world country in terms of geothermal energy production. In the last year an additional 12 percent of Kenyan households have been connected to the national grid and energy costs have come down by 50 percent. Foreign investors in oil are pitching camp in the county in large numbers. These investors are continuously found at the many international conferences that the energy ministry officials attend and present key note papers and addresses.
The Energy & Petroleum docket’s outstanding imprests stood at shs. 14.68 million or close to 5 times less than that of the Ministry of Sports, Culture and the Arts.
Consider too the record miles covered by the Ministry of Foreign Affairs and International Trade. In the period, the ministry officials have managed to re-establish the country as a tour de force in Africa and an increasingly listened to international partner. Some of the largest firms in the world have set up their African headquarters in Nairobi – IBM, Microsoft, Google, Intel among many others. Global hotel brands such as Radisson Blu, DusitD2, Kempinski and Hemingways have established operations in the country, with Marriot – a five-star international hotel – announcing plans to open a hotel in Kenya this year. In addition, in March this year, highly respected Bloomberg projected that Kenya would be the third fastest growing economy in the world this year. The economists that were surveyed by Bloomberg Business ranked Kenya and Nigeria as the only African countries that made it to the list of the fastest growing economies in the world this year.
The Foreign Affairs & International Trade docket’s outstanding imprests stood at shs. 23.9 million or close to three times less than that of the Ministry of Sports, Culture and the Arts.
Can the Sports, Culture & the Arts docket give such a catalogue of achievements?
Would you like to get published on this Popular Blog? You can now email Cyprian Nyakundi any breaking news, Exposes, story ideas, human interest articles or interesting videos on: [email protected] Videos and pictures can be sent to +254 710 280 973 on WhatsApp, Signal and Telegram.