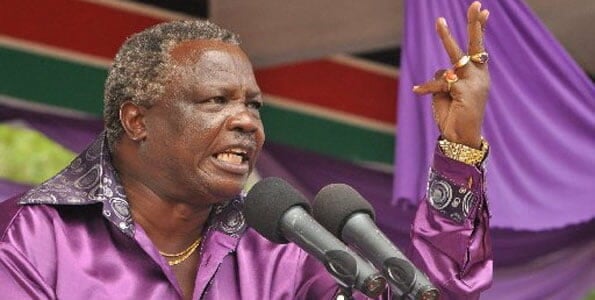 Five Cotu officials, including secretary general Francis Atwoli have sued a Cabinet secretary, two MPs and a city politician for defamation for linking them to the murder of Kabete MP George Muchai.

This was after Atwoli and the five officials made good their threat and sued the public officers for alleging they were linked to the murder. The suit came even as five people were arraigned in court over the murder of Muchai who was gunned down together with his driver and two bodyguards 12 days ago at dawn on Kenyatta avenue in Nairobi.

Senior prosecuting Counsel Duncan Ondimu told the court that the suspects were connected to several robbery with violence cases and murder of Muchai, police constables Samuel Montata and Samuel Kairingia and driver Stephen Wambugu. Another suspect, Simon Gachamba, was remanded last Friday for 14 days over the same murder.
Under a certificate of urgency, the Cotu officials have accused Kambi and the politicians of making the allegations without evidence. Atwoli, Rajab Mwondi, Rebecca Nyathogora, Francis Wangara, Joseph Nyabiya and Washington Adongo said they have taken the legal action against the four for making the allegations yet they had not recorded any statements with relevant arms of government.
According to the Cotu officials, the MPs were only concerned with creating a sensation during the funeral of Muchai last Friday for purposes of benefiting them politically and without regard to the character and reputation of the trade unionists. In a sworn affidavit, Atwoli claims the statements made were “false, wrongful, malicious and have exposed them to danger as the matter is very sensitive to the general public.”
“The false, wrongful and malicious words and statements have exposed my personal, professional standing and character to contempt and embarrassment,” Atwoli states. He contends that the statements have caused him to suffer enormous loss and damage as the same was broadcast to the public, family, clients, friends and professional colleagues who hold him in high esteem.
Atwoli goes on to say that publication of the defamatory and malicious statements continues to injure his reputation, professional integrity and status in Cotu as a union. Through his advocate, the Cotu official said: “Unless the orders sought are granted, the defendants, either by themselves, servants or agents shall continue defaming me to my detriment together with my colleagues and Cotu(K) as an institution and to damage our character beyond repair.”
Atwoli was further aggrieved by statements claiming that he had misappropriated Cotu funds, saying it was understood to mean that he is a “conman, fraudster and a criminal who misused his position and influence to defraud workers of their money”.
“The words in their natural and ordinary sense were understood to mean that I cannot be trusted and therefore not fit to hold the public office that I currently hold,’’he said.